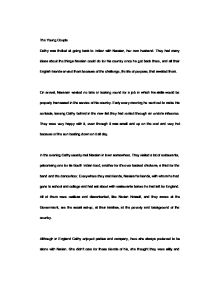 The Young Couple Cathy was thrilled at going back to Indian with Naraian, her new husband. They had many ideas about the things Naraian could do for his country once he got back there, and all their English friends envied them because of the challenge, the life of purpose, that awaited them. On arrival, Nararian wasted no time in looking round for a job in which his skills would be properly harnessed in the service of his country. Early every morning he went out to make his contacts, leaving Cathy behind in the new flat they had rented through an uncle's influence. They were very happy with it, even through it was small and up on the roof and very hot because of the sun beating down on it all day. In the evening Cathy usually met Naraian in town somewhere. They visited a lot of restaurants, patronising one for its South Indian food, another for it's over backed chickens, a third for the band and the dance-floor. Everywhere they met friends, Narairan's friends, with whom he had gone to school and college and had sat about with restaurants before he had left for England. All of them were restless and discontented, like Narian himself, and they swore at the Government, are the social set-up, at their families, at the poverty and background of the country. Although in England Cathy enjoyed parties and company, here she always preferred to be alone with Narian. She didn't care for these friends of his, she thought they were stilly and spoiled, and what galled her most of all was their attitude to herself. ...read more.

Of course, it is not easy to do anything decisive and independent while they were living the way they were, with Naraian's family supporting them completely; and the most important step now was for Narian to get himself a job to support the two of them. But, as they both fully agreed, it was no just rushing anything; he had to have time to look around and weight possibilities, so that the end wound have something beautiful and useful where he would be fully engaged. In the meantime, Cathy would have been glad to help out and get a job herself. She had done quite lot things in England. She had been a receptionist to a Harley Street socialist, a sales assistant in an airlines office and one for a brief while a waitress on a coffee bar, but of course she realised that it was impossible to do anything like that here because of her, or rather the family's background and social standing. She continued to spend her days as she had done before she felt time lapping deliciously round her in endless honeyed hours, now her feeling were once of boredom. The endless hours were harsh not honeyed one, when she sand down on her bed, it was not in enjoyment, soft languid, stretching herself, but a dry boredom with nothing to do, nothing to think, and many hours yet still it was time to meet Nararian. And even when she did meet him - she was bored with the restaurants now, she new all the bearers down to the stains on each one's uniform, had eaten all the dishes on the menu and found them all tasting the same. ...read more.

Soon, however, he was speaking out more clearly and he said, did she think he was going to put up with a place like this for ever? And he kicked a door so that its poor cheap wood splintered a bit further. And the only thing Cathy could think of indefence was, but look at the view! And pointed towards the dome of the mausoleum darkening against a tender flush of sunset and a formation of birds, wing a - tilt, going round it swift as bats in a last flight before plunging down into the trees to settle themselves to sleep. In reply, Nararian pulled a contemptuous face with made it clear what sort of importance he attached to the view. But this expression - though an honest, spontaneous one - he held for only a moment the next he had corrected it, looked in fact sympathetic. Probably he had recollected the way they had once used to talk, the art galleries they had visited in England, the plays they had witnessed, the opinions they had so seriously held on life and how to live it. 'What does it matter, Cathy,' he said, putting his arm round her, and his voice was tender, and so was the way he looked at her, 'what does it matter where we are as long as we are together?' the kissed. The kiss was delicious but, even while it was going on, set within it as in a heartshaped frame, she had a vision of the room that was being got ready for them: the same heavy, shiny furniture as the rest of the house, a carpet, ample satin bedspreads matching the curtains... ...read more.