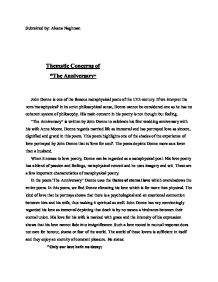 Submitted by: Aleena Naghman Thematic Concerns of "The Anniversary" John Donne is one of the famous metaphysical poets of the 17th century. If we interpret the term 'metaphysical' in its strict philosophical sense, Donne cannot be considered one as he has no coherent system of philosophy. His main concern in his poetry is not thought but feeling. "The Anniversary" is written by John Donne to celebrate his first wedding anniversary with his wife Anne Moore. Donne regards married life as immortal and has portrayed love as sincere, dignified and grand in this poem. This poem highlights one of the shades of the experience of love portrayed by John Donne that is 'love for soul'. The poem depicts Donne more as a lover than a husband. When it comes to love poetry, Donne can be regarded as a metaphysical poet. His love poetry has a blend of passion and feelings, metaphysical conceit and he uses imagery and wit. These are a few important characteristics of metaphysical poetry. ...read more.

There are rarely any poets who write poetry as passionately as Donne for their wives. This unique ability of the poet makes him distinct, thus highlights the theme of sincerity. In the third stanza he paves a way for this theme when he says that none is secure as they are, That both beloved and the lover are like kings and subjects to each other and no other couple can come parallel to them in their feelings. The idea of sincerity incorporates the face that their love knows no fear. In good and bad times they will always make it through. They will love and honour each other nobly till they have attained the age of sixty. Thereby we are convinced that both the husband and the wife will perpetually live in the state of bliss. The expression of Donne's sincerity is vividly seen in the following lines: "Let us love nobly, and live, and add again Years and years unto years, till-we attain To write threescore," Like the others, this theme is also the poets own sentiments. ...read more.

The most important theme as the title suggests is the theme of anniversary. It is the second occasion of the lover's sight of one another. Initially, when the poem starts the reader is not clear whether it is really the occasion of anniversary of two lovers. Instead, we might get disillusioned with the fact that it could be the opening of a poem praising royalty, when the opening lines state: "All kings, and all their favourites All glory of honours, beauties, wits," This point of the poem celebrating an anniversary is contradicted in the very next stanza with the idea that their love is timeless. However, the reader is still not sure whether the lovers are married or not because there is no mention of marriage in the poem. It could be the anniversary of their love. Concluding, this poem is one of the most interesting poems of John Donne, I have read so far. It encapsulates metaphysical conceit, imagery, wit and nonetheless a blend of passion and feelings consequently, making it a good example of metaphysical poetry. However, John Donne's poem is worth every ounce of adulation. ...read more.