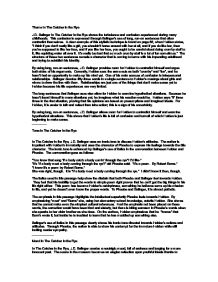 Theme in The Catcher in the Rye.

Theme in The Catcher in the Rye J.D. Salinger in The Catcher in the Rye shows the turbulence and confusion experienced during many childhoods. This confusion is expressed through Salinger's use of long, run-on sentences that often contradict themselves. A clear example of this stylistic technique is found on page 62, when Holden states, "I think if you don't really like a girl, you shouldn't horse around with her at all, and if you do like her, then you're supposed to like her face, and if you like her face, you ought to be careful about doing crumby stuff to it, like squirting water all over it. It's really too bad that so much crumby stuff is a lot of fun sometimes." The structure of these two sentences reveals a character that is coming to terms with his impending adulthood and trying to establish his identity. By using long, run-on sentences, J.D. Salinger provides room for Holden to contradict himself and argue both sides of his arguments. Currently, Holden sees the same acts as both "crumby" and "fun", and he hasn't had an opportunity to make up his mind yet. One of his main sources of confusion is interpersonal relationships. Salinger devotes fifty-three words in a single sentence to Holden's musings about girls and where to draw the line with them. Relationships are just one of the things that don't make sense yet to Holden because his life experiences are very limited. The long sentences that Salinger uses also allow for Holden to examine hypothetical situations. Because he hasn't found himself in many situations yet, he imagines what his reaction would be. Holden says "if" three times in the first situation, proving that his opinions are based on presumptions and imagined ideals. For Holden, it is easier to talk and reflect than take action; this is a sign of his uncertainty. By using long, run-on sentences, J.D. ...read more.

Something about his discontent, and his vivid way of expressing it, makes him resonate powerfully with readers who come from backgrounds completely different from his. It is tempting to inhabit his point of view and revel in his cantankerousness rather than try to deduce what is wrong with him. The obvious signs that Holden is a troubled and unreliable narrator are manifold: he fails out of four schools; he manifests complete apathy toward his future; he is hospitalized, and visited by a psychoanalyst, for an unspecified complaint; and he is unable to connect with other people. We know of two traumas in his past that clearly have something to do with his emotional state: the death of his brother Allie and the suicide of one of his schoolmates. But, even with that knowledge, Holden's peculiarities cannot simply be explained away as symptoms of a readily identifiable disorder. The most noticeable of Holden's "peculiarities" is how extremely judgmental he is of almost everything and everybody. He criticizes and philosophizes about people who are boring, people who are insecure, and, above all, people who are "phony." Holden carries this penchant for passing judgment to such an extreme that it often becomes extremely funny, such as when he speculates that people are so crass that someone will probably write "f**k you" on his tombstone. Holden applies the term "phony" not to people who are insincere but to those who are too conventional or too typical-for instance, teachers who "act like" teachers by assuming a different demeanor in class than they do in conversation or people who dress and act like the other members of their social class. While Holden uses the label "phony" to imply that such people are superficial, his use of the term actually indicates that his own perceptions of other people are superficial. In almost every case, he rejects more complex judgments in favor of simple categorical ones. ...read more.

In doing so, he divests the hat of its negative symbolism (that of being a crutch for him to rely upon) and emphasizes the positive protective qualities for which it was originally made. The Museum of Natural History - Holden explicitly tells us the symbolic meaning of the museum's displays: they appeal to him because they are frozen and unchanging. He also mentions that he is troubled by the fact that he has changed every time he returns to them. The museum represents the world Holden wishes he could live in: it's the world of his "catcher in the rye" fantasy, a world where nothing ever changes, where everything is simple, understandable, and infinite. Holden is terrified by the unpredictable challenges of the world-he hates conflict, he is confused by Allie's senseless death, and he fears interaction with other people. The Ducks in the Central Park Lagoon - Holden's curiosity about the where the ducks go during the winter reveals a genuine, more youthful side to his character. For most of the book, he sounds like a grumpy old man who is angry at the world, but his search for the ducks represents the curiosity of youth and a joyful willingness to encounter the mysteries of the world. It is memorable moment, because Holden clearly lacks such willingness in other aspects of his life. The ducks and their pond are symbolic in several ways. Their mysterious perseverance in the face of an inhospitable environment resonates with Holden's understanding of his own situation. In addition, the ducks prove that some vanishings are only temporary. Traumatized and made acutely aware of the fragility of life by his brother Allie's death, Holden is terrified by the idea of change and disappearance. The ducks vanish every winter, but they return every spring, thus symbolizing change that isn't permanent, but cyclical. Finally, the pond itself becomes a minor metaphor for the world as Holden sees it, because it is "partly frozen and partly not frozen." The pond is in transition between two states, just as Holden is in transition between childhood and adulthood. ...read more.