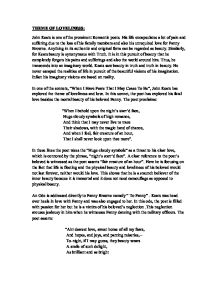 THEME OF LOVELINESS: John Keats is one of the prominent Romantic poets. His life encapsulates a lot of pain and suffering due to the loss of his family members and also his unrequited love for f***y Browne. Anything in its authentic and original form can be regarded as beauty. Similarly, for Keats beauty is synonymous with Truth. It is in this pursuit of beauty that he completely forgets his pains and sufferings and also the world around him. Thus, he transcends into an imaginary world. Keats saw beauty in truth and truth in beauty. He never escaped the realities of life in pursuit of the beautiful visions of his imagination. Infact his imaginary visions are based on reality. In one of the sonnets, "When I Have Fears That I May Cease To Be", John Keats has explored the theme of loveliness and love. In this sonnet, the poet has explored his fatal love besides the mortal beauty of his beloved f***y. ...read more.

In this ode, the poet is filled with passion for her but he is a victim of his beloved's neglection .This neglection arouses jealousy in him when he witnesses f***y dancing with the military officers. The poet asserts: "Ah! dearest love, sweet home of all my fears, And hopes, and joys, and panting miseries,-- To-night, if I may guess, they beauty wears A smile of such delight, As brilliant and as bright As when with ravish'd, aching, vassal eyes, Lost in soft amaze, I gaze, I gaze! Who now, with greedy looks, eats up my feast?" In these lines the poets addresses f***y and calls her the home of his hopes, joys, fears and miseries. He imagines f***y to be the prettiest creature in the world at least for one night. However, he is possessive about his lover and warns her not to allow anybody to touch her so that he may get the best of her. Furthermore, the poet says: "Why, this - you'll say, my f***y !is not true: Put your soft hand upon your snowy side. ...read more.

In "Ode to Melancholy", analogous themes are explored by the poet but not with specific reference to f***y. However, these themes very subtly highlight Keats' fascination for his beloved. The poet talks about the transience of melancholy thus projecting it as something beautiful. It further conveys the notion that the poet has tasted all flavors of life and transforms all heartachening emotions into rays of hope. Keats says: "Or if thy mistress some rich anger shows, Emprison her soft hand, and let her rave And feed deep, deep upon her peerless eyes." The phrase "thy mistress" used in these lines is yet another allusion for f***y. In these lines the poet is appreciating the beauty of an angry mistress. Consequently, he reflects that even in anger he finds his beloved beautiful. The moment is transient so he must get hold of it as it makes the mistress look lovelier. This beauty of the beloved would pass away as soon as her anger subsides. Here we notice that the bewitching and beautiful eyes of the beloved are also praised. ...read more.