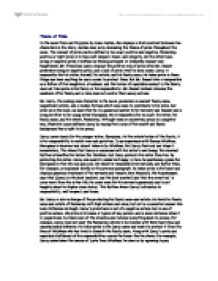 Theme of Pride In the novel Pride and Prejudice by Jane Austen, she displays a stark contrast between two characters in the story. Austen does so by discussing the theme of pride throughout the novel. The concept of pride can be defined in two ways: positive and negative. Possessing positive or right pride is to have self-respect, honor, and integrity. On the other hand, wrong or negative pride is defined as showing arrogant or disdainful conduct and haughtiness. Mr. Fitzwilliam Darcy displays the positive side of pride while Mr. Bennet possesses wrong or negative pride, and a lack of pride itself in some cases. Darcy is responsible for his sister, himself, his estate, and his family name. He takes pride in these things and does anything he can in order to protect them. But Mr. Bennet who is responsible as a father of five daughters, a husband, and the holder of reputable conduct in the family, does not take pride in his family or his responsibility; Mr. Bennet instead ridicules the members of his family and in turn does not control their unruly actions. ...read more.

This further shows Darcy's attention to responsibility, self-respect, and honor. Mr. Darcy is also in charge of the protecting his family name and estate. He holds his family name and estate of Pemberley with high esteem and value, but not in a conceited manner like Lady Catherine de Bough. Darcy's pride here is not of a negative nature, but is one of positive nature. His pride in his name is typical of any person; and in some instances when it is jeopardized, he takes care of the situation and returns everything back to normal. For example, Darcy does not want the Pemberley estate to be tainted with Wick ham's foul and unconscionable behavior. He takes pride in the Darcy name and wants to protect it from the likes of Wickham who has tried to blemish the family name. Along with Darcy's pride and reputable fulfillment of his responsibilities comes the honor that he shows. For example, Darcy undertakes the rescue of Lydia from Wickham; he does so by agreeing to pay Wickham a certain amount in turn for his marriages with Lydia. ...read more.

Because he has tried to get a son and gets five daughters instead. There is no one to hand it down to; thus the estate goes to Mr. Collins, his cousin. Expecting a son, he never saw a need to save any of his income in order to provide for his daughters' future. Mr. Bennet fails his responsibility to provide for his family and daughters. His lack of pride leads to his own lack of responsibility for the things that should be most important to him, his family and its reputation. Mr. Darcy and Mr. Bennet differ obviously concerning the subject of pride. Darcy possesses a positive form of pride while Bennet almost has none at all. But within the pride, there exists a difference in priority. Mr. Darcy is careful about the Darcy family name and protects it with a hawk-like manner. He takes his responsibility as the landowner, brother, and master very seriously. On the other hand, Mr. Bennet lets his family do as it pleases and almost does not care. The reputation of the Bennet family is blemished by the behavior of its members because the head of the household, Mr. Bennet, lacks the pride to protect it. ...read more.