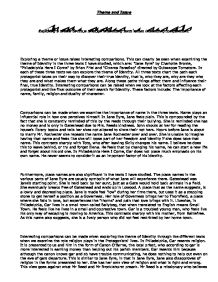 Themes and Issues in Jane Eyre, Cinema Paradiso and Philadelphia Here I Come. - A comparative study.

Theme and Issue Exploring a theme or issue through interesting texts raises interesting comparisons. Exploring a theme or issue raises interesting comparisons. This can clearly be seen when examining the theme of Identity in the three texts I have studied, which are: "Jane Eyre" by Charlotte Bronte, "Philadelphia Here I Come" by Brian Friel and "Cinema Paradiso" directed by Guisseppe Tornatore. In each of these three texts we can explore the theme of Identity. All three texts chart the path each protagonist takes on their way to discover their true identity, that is, who they are, why are they who they are and what makes them what they are. Along these paths things affect them and influence their final, true Identity. Interesting comparisons can be raised when we look at the factors affecting each protagonist and the final outcome of their search for Identity. These factors include: The importance of name, family, religion and duality of character. Comparisons can be made when we examine the importance of name in the three texts. Name plays an influential role in how one perceives himself. In Jane Eyre, Jane feels plain. This is compounded by the fact that she is constantly reminded of this by the reeds through their bullying. She is reminded she has no money and is only in Gateshead due to Mrs. Reeds kindness. John shouts at her for reading the house's library books and tells her shes not allowed to since their not hers. ...read more.

Jane does not feel that religion, as show to her by Mr Rivers and Brocklehurts are the "right" or "true" religions. Both of these texts contrast greatly with Cinema Paradiso. Here, religion is presented to us in a positive way in the form of Fr. Adelfio. Toto serves as his altar boy, often falling asleep due to hunger during mass. Fr Adelfio does not get angry at this, and instead pities Toto. He also allows Toto to get a ride back home with Alfredo when walking home, instead of making him walk with him. He is a very understanding priest, who truly wants the best for his people. While he censors movies, he does this because he thinks it is in his peoples' interest. He is also very understanding when Alfredo has his "crisis of faith" and at no point gives out to him, or in any way looks down upon him, for doubting the Catholic religion. Religion in both Jane Eyre and Philadelphia have negative impacts on the identity of the protagonists, who are left wondering what to believe is right and wrong, something integral in ones Identity. This contrasts sharply with Cinema Paradiso, where Toto feels welcomed by religion and the Church, and leaves home with a sense of what is right and wrong. Another example of how interesting comparisons can be made when exploring the theme of identity throughout the different texts is seen when examining how family affects the protagonists. ...read more.

Religion also plays a big role in the forming of the protagonists Identity. Gar and Jane have to set their own moral standards due to the inadequacy of the religious figures during their life. It is interesting to see how different a childhood they had to Toto's, who was ably guided by Fr Adelfio and Alfredo. His was a happy , albeit poor (economically) one. When examining the theme of Identity, we see the importance of having a competent and unselfish Religious leader, who will take care of his people to the maximum extent of his abilities. We also see the importance of father figures to the protagonists. This is similar to the effect of the religious leaders, in that Toto who has the best father figure int he form of Alfredo has the happiest childhood. Jane and Gar on the other hand have practically no mother/father figureheads, with the exception of Madge, who didn't get along with Gar as well as Toto did with Alfredo. The final interesting comparisons raised when examining the theme of identity is the dual-personality of the protagonists. It is interesting to note that Jane, who eventually finds a balance between both personalities and beliefs ends up a happily married, successful woman, while gar, who is not able to express his true feelings end his texts still lacking in identity and still uncertain about his future. Toto, who never has a problem with dual-personalities never seems to have the internal struggles both Jane and Gar had. All these interesting comparisons were raised when one examined the three texts under the theme of Identity. ...read more.