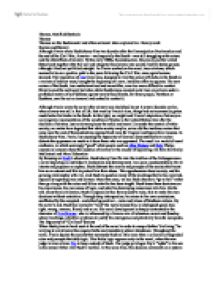 Themes are the fundamental and often universal ideas explored in a literary work - r****m and Slavery - Twains' Huckleberry Finn.

Themes, Motifs & Symbols Themes Themes are the fundamental and often universal ideas explored in a literary work. r****m and Slavery Although Twain wrote Huckleberry Finn two decades after the Emancipation Proclamation and the end of the Civil War, America-and especially the South-was still struggling with r****m and the aftereffects of slavery. By the early 1880s, Reconstruction, the plan to put the United States back together after the war and integrate freed slaves into society, had hit shaky ground, although it had not yet failed outright. As Twain worked on his novel, race relations, which seemed to be on a positive path in the years following the Civil War, once again became strained. The imposition of Jim Crow laws, designed to limit the power of blacks in the South in a variety of indirect ways, brought the beginning of a new, insidious effort to oppress. The new r****m of the South, less institutionalized and monolithic, was also more difficult to combat. Slavery could be outlawed, but when white Southerners enacted r****t laws or policies under a professed motive of self-defense against newly freed blacks, far fewer people, Northern or Southern, saw the act as immoral and rushed to combat it. Although Twain wrote the novel after slavery was abolished, he set it several decades earlier, when slavery was still a fact of life. But even by Twain's time, things had not necessarily gotten much better for blacks in the South. ...read more.

Again and again, Huck encounters individuals who seem good-Sally Phelps, for example-but who Twain takes care to show are prejudiced slave-owners. This shaky sense of justice that Huck repeatedly encounters lies at the heart of society's problems: terrible acts go unpunished, yet frivolous crimes, such as drunkenly shouting insults, lead to executions. Sherburn's speech to the mob that has come to lynch him accurately summarizes the view of society Twain gives in Huckleberry Finn: rather than maintain collective welfare, society instead is marked by cowardice, a lack of logic, and profound selfishness. Motifs Motifs are recurring structures, contrasts, or literary devices that can help to develop and inform the text's major themes. Childhood Huck's youth is an important factor in his moral education over the course of the novel, for we sense that only a child is open-minded enough to undergo the kind of development that Huck does. Since Huck and Tom are young, their age lends a sense of play to their actions, which excuses them in certain ways and also deepens the novel's commentary on slavery and society. Ironically, Huck often knows better than the adults around him, even though he has lacked the guidance that a proper family and community should have offered him. Twain also frequently draws links between Huck's youth and Jim's status as a black man: both are vulnerable, yet Huck, because he is white, has power over Jim. ...read more.

Petersburg. Much like the river itself, Huck and Jim are in flux, willing to change their attitudes about each other with little prompting. Despite their freedom, however, they soon find that they are not completely free from the evils and influences of the towns on the river's banks. Even early on, the real world intrudes on the paradise of the raft: the river floods, bringing Huck and Jim into contact with criminals, wrecks, and stolen goods. Then, a thick fog causes them to miss the mouth of the Ohio River, which was to be their route to freedom. As the novel progresses, then, the river becomes something other than the inherently benevolent place Huck originally thought it was. As Huck and Jim move further south, the duke and the dauphin invade the raft, and Huck and Jim must spend more time ashore. Though the river continues to offer a refuge from trouble, it often merely effects the exchange of one bad situation for another. Each escape exists in the larger context of a continual drift southward, toward the Deep South and entrenched slavery. In this transition from idyllic retreat to source of peril, the river mirrors the complicated state of the South. As Huck and Jim's journey progresses, the river, which once seemed a paradise and a source of freedom, becomes merely a short-term means of escape that nonetheless pushes Huck and Jim ever further toward danger and destruction. ...read more.