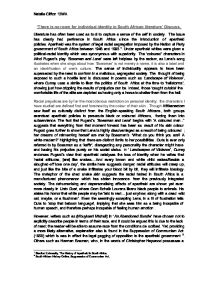 There is no room for individual identity in South African literature Discuss.

'There is no room for individual identity in South African literature' Discuss. Literature has often been used as tool to capture a sense of the self in society. The issue has clearly had pertinence in South Africa since the introduction of apartheid policies. Apartheid was the system of legal racial segregation imposed by the National Party government of South Africa between 1948 and 19931. Under apartheid whites were given a political-racial identity which was synonymous with superiority. The 'coloured' characters in Athol Fugard's play 'Boesman and Lena' were left helpless by the r****m, as Lena's song illustrates when she sings about how 'Boesman' is not merely a name, it is also a label and an identification of one's culture. The sense of individuality appears to have been superseded by the need to conform in a malicious, segregated society. The thought of being exposed to such a hostile land is discussed in poems such as 'Landscape of Violence', where Currey uses a simile to liken the politics of South Africa at the time to 'hailstorms', showing just how crippling the results of prejudice can be. Indeed, those 'caught outside' the comfortable life of the elite are depicted as having only a horse to shelter them from the hail. Racial prejudices are by far the most obvious restriction on personal identity; the characters I have studied are defined first and foremost by the colour of their skin. Though Afrikanerdom saw itself as culturally distinct from the English-speaking South Africans, both groups exercised apartheid policies to persecute black or coloured Africans, forcing them into subservience. The fact that Fugard's 'Boesman and Lena' begins with 'A coloured man...' suggests that everything from that moment forward has been as result of his skin colour. Fugard goes further to show that Lena is highly disadvantaged as a result of being coloured; her dreams of reinventing herself are met by Boesman's 'What do you think you are? ...read more.

'A life of hardship and dissipation' has arguably stripped Lena of genuinely positive emotion and when later talking to Outa she laments 'once you've put your life on your head and walked you never get light again'. There are a number of parallels between Lena and the 'mother' depicted in the final stanza of 'An Abandoned Bundle'. Both are forced to continue living in a world which does not recognise the terrible tragedies of their past; the image of the 'abandoned bundle's' mother 'melting into the rays of the rising sun' seemed to be presented through the eyes of the child, who would have been looking up at its mother's face as she drew away. However, 'melt' may also suggest her fading away again into a crowd, an 'innocent' face concealing her terrible secret. Comparably, Lena is not allowed to remember her lost child properly, due to Boesman's inability to discuss it with her on a personal level. Parallels may also be drawn against Sally (from Casey Motsisi's 'The Efficacy of Prayer') who, like Lena, dreams of breaking free from the restrictions placed on her by society. Her dream to 'be just like Dan the Drunk' comes true with the irony that the best Sally could become was something Dan the Drunk already was - and whilst he was underachieving for a white man, this was the best a black girl may hope for. Athol Fugard is quoted as saying of 'Boesman and Lena', 'It's an examination of a relationship between a man and a woman in which the man is a bully. . . . I think my wife has been on the receiving end of a lot of that sort of greed and selfishness.8' Yet despite the guilt the author carries abuse is almost commonplace in South Africa. One in every three women in South Africa is in an abusive relationship, a woman is killed by her partner every six days and there is a r**e every 35 seconds9. ...read more.

The way Turner is 'banned; neither to be published/ nor quoted in any form' and 'forbidden to teach', represents a persistent attempt by the state to prevent his influence on others. While the line 'a gunman called you to the door' shows the juxtaposition of politics and a domestic setting, the state imposing its views on the lives of others, even in the face of death, Turner is the more powerful figure. Even if, in reality, Turner did not choose the circumstances of his death, he did choose to resist oppression, in spite of knowing the risks. Similarly Dhlomo's belligerent harangue 'Because I'm Black' aggressively explains that 'diversity means not disunion', and speaks out against those who 'harbour childish [delusions]'. As individuals we find ourselves caught up in greater events, and must choose whether to look on passively, and 'thrust (our cold hands)...into/ our ultimately private pockets', or to stand up for what we believe in. As a country it is important to rely upon each other, rather than the state, for validation. Yet in a country with as rich and polarised a political history as South Africa, its literature find will it difficult to survive without ever really avoid focussing on the social contexts which have played such an integral part in the shaping of the country it is today. 3247 words (inc quotes) 1 Stanford University. The History of Apartheid in South Africa. 2 South African History Online. Suppression of Communism Act. 3 Christopher Heywood. A History of South African Literature. 4 Rebecca Davis. Unstable Ironies: Narrative Instability in Herman Charles Bosman's "Oom Schalk Lourens" Series. 5 Dennis Walder. Athol Fugard. 6 Dr. Steinwand. Fugard. The censorship of Theater in South Africa. 7 Wertheim, A. The Dramatic Art of Athol Fugard: From South Africa to the World. 8 Dennis Walder. Introduction to 'Port Elizabeth Plays' 9 Africa Focus. Gender Equality. 10 Craig W. McLuckie. Power, self, and other: the absurd in 'Boesman and Lena' 11 Dennis Walder. Athol Fugard. 12 Stanley Kauffmann. Review of Boesman & Lena. ?? ?? ?? ?? Natalie Clifton 13WA ...read more.