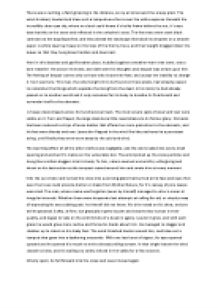 There Was A Rustling...

﻿There was a rustling, a faint groaning in the distance, an icy air all around the snowy plain. The wind shrieked, howled and blew such a tempestuous force over the white expanse. Beneath the incredibly clear cyan sky, where no cloud could heave it?s bulky frame before the sun, it?s rays beat harshly on the snow and reflected in the onlooker?s eyes. The few trees were stark black contrasts to the dazzling white, and they dotted the landscape like black ink droplets on a smooth paper. A white layer lay heavy on the tops of the thorny trees, and their weight dragged down the leaves so that they hung downtrodden and downcast. Here in this desolate and god-forsaken place, huddled against a weather-worn tree stem, was a lone traveller. ...read more.

A heavy cloak draped across his hunched-over back. The most severe signs of wear and tear were visible on it. Torn and frayed, the large cloak bore little resemblance to its former glory. His boots had been reduced to strips of loose leather that offered no more protection to the elements, and his feet were b****y and raw. Loose skin flapped in the wind like kites tethered to a persistent string, until finally they were worn away by the cold and wind. The warming effect of all the other clothes was negligible, and the cold snaked into every small opening and worked it?s malice on the vulnerable skin. The wind picked up the snow particles and stung like a million daggers into his body. ...read more.

His chin rested on his chest, and yet still he groaned. Softly, at first, but gradually it grew louder and become less human in their quality, and began to take on the wild shrieks of a beast in agony. Louder it grew, and with each groan he would grow more restive and throw his hands about him. He managed to stagger and clamber up to stand on his shaky feet. The wind thrashed harder around him, and blew out a tempest that grew into a deafening crescendo. With one last burst of vigour, his eyes opened upward and he opened his mouth to emit a bloodcurdling scream. In that single instant the wind ceased to blow, and his wailing cry solely echoed in the valley for a few seconds. Utterly spent, he fell forward into the snow and never moved again. ...read more.