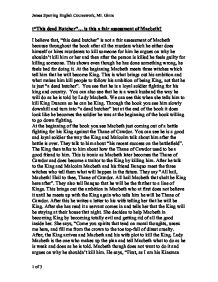 &quot;This dead Butcher&quot;... is this a fair assessment of Macbeth?

t"This dead Butcher"... is this a fair assessment of Macbeth? I believe that, "this dead butcher" is not a fair assessment of Macbeth because throughout the book after all the murders which he either does himself or hires murderers to kill someone for him he argues on why he shouldn't kill him or her and then after the person is killed he feels guilty for killing someone. This shows even though he has done something wrong, he feels bad for doing it. At the beginning Macbeth meets three witches which tell him that he will become King. This is what brings out his ambition and what makes him kill people to follow his ambition of being King, not that he is just "a dead butcher". You see that he is a loyal soldier fighting for his king and country. You can also see that he is a weak husband the way he will do as he is told by Lady Macbeth. We can see this when she tells him to kill King Duncan so he can be King. Through the book you see him slowly downhill and turn into "a dead butcher" but at the end of the book it does look like he becomes the soldier he was at the beginning of the book willing to go down fighting. ...read more.

After, the King arrives and Macbeth and his wife plot to kill the King. Lady Macbeth is the one who makes up the plan and tell Macbeth what to do as he is weak and does as he is told. Macbeth though does not want to do it and argues on why he shouldn't kill him. He says, "First, as I am his Kinsman and his subject, Strong both against the deed; then as his host, Who should against his murderer shut the door, not bear the knife myself." What this means that I should not kill as he is my King and I should follow him. He is also my guest so why should I do it. This does show that he is not a "dead butcher". But eventually his wife tells him to it. This also shows he doesn't want to do kill him but if he wishes to pursue his ambition he must kill Duncan. Once he has gone to Duncan's room and killed him he feels very guilty and brings the daggers back down to lady Macbeth. He also hears sounds of screeches showing his state of mind is guilty. ...read more.

Macbeth then kills Macduff's family. When he does this he feels no remorse even though he has also killed children. It does sow that he is a cold man who will still do anything for ambition. In the final act of the book all the first prophesy comes true about how he will be attacked as the woods move on Dunsinane Hill. You then see Macbeth turn into the soldier he once was at the beginning of the book. He decides instead of surrendering he fights like a soldier. The other two apparitions come true as Macduff; Thane of Fife was not brought up by his mum as she died at birth. They fight bravely but Macbeth does eventually die by Macduff but like a soldier. Overall I believe that Macbeth is not just "a dead butcher" because he does argue on why he should not kill certain people and normally feels guilty after the death of close people, such as King Duncan and Banquo where he sees the ghost of him sitting opposite him. But I do also think that in some cases like the grooms and Macduff's family he feels no remorse and just does it in cold blood to pursue his ambition of being King James Sperring English Coursework, Mr. Ginns 1 of 3 ...read more.