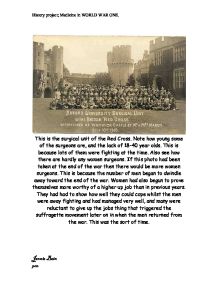 This is thesurgical unit of the Red Cross - Note how young some of the surgeons are, and the lack of 18-40 year olds - This is because lots of them were fighting at the time - Also see how there are hardly any women surgeons.

This is the surgical unit of the Red Cross. Note how young some of the surgeons are, and the lack of 18-40 year olds. This is because lots of them were fighting at the time. Also see how there are hardly any women surgeons. If this photo had been taken at the end of the war then there would be more women surgeons. This is because the number of men began to dwindle away toward the end of the war. Women had also begun to prove themselves more worthy of a higher up job than in previous years. They had had to show how well they could cope whilst the men were away fighting and had managed very well, and many were reluctant to give up the jobs thing that triggered the suffragette movement later on in when the men returned from the war. This was the sort of time. Introduction. Although war is a terrible thing, it can sometimes be helpful, for instance, in the medical profession. Surgical and psychological advances are needed, fast, and this makes medical knowledge speed up dramatically. World War One is a very good example of this. A lot of the things about medicine that we know today were not known 100 years ago, and it was the war that brought them out. There are 4 main areas that I want to look at. These are: 1. Psychiatry 2. Surgery 3. ...read more.

If the injury could be repaired without amputation, it was. But more often than not, with the trenches being full of infection, the injuries often turned gangrene before they could be operated upon. If a wound turned gangrene there was little you could do, and amputation was the only way to stop the infection spreading. Sometimes the limb was so badly injured, often by bombs shells, that amputation was the only option anyway, infected or not. This was particularly bad for the patient, as they tended to lose more blood this way. However, about half way through the war, an amazing thing happened, blood transfusions became available! Blood transfusions were a very big step in the way of medical advance. This meant that more major forms of surgery could be performed, and for longer, more sustained periods of time. Blood from donors in Britain was sent across the channel to the continent, but often intercepted by other armies. Blood was very sought after, but the English found a way round this problem. They labelled all the blood wrong so the German patients got the wrong blood type, and the Germans stopped taking it! Other aspects of surgery also advanced in World War One. Bullet removal was also a revelation. In the past, if you were shot then you died, but by the middle of World War One there was ways to remove the bullet and any blood that it had poisoned. ...read more.

The Lung Irritants (or Suffocators) were used to kill. They caused severe oedema of the lungs (caused the lungs to fill with liquid), and there was no way back after concentrated inhalation. The Escharotics irritated the skin and eyes, consequently causing rashes and redness. All these gasses were nasty and when used in chambers, some could kill. Chemical warfare had begun. Conclusion I think that World War One did lead to medical advance. It was a terrible thing but there is no great loss without some gain, and without some of these discoveries, World War One would have been even more tragic than it was. These discoveries have saved lives, and I think, helped us to win the war, our soldiers lasted longer, due to good medical treatment and we were as a nation, much healthier. The need for treatments fast spurred on the medical profession and they made discoveries un-thought of in the past. They could try out new techniques and methods, and many of them worked. Psychiatry made a break through. People realised here was such thing as mental illness, and this would definitely not have happened without the war, and shell shock. Overall, I think World War One did lead to medical advance, and without it we could still be living in the past. Website: www.raven.co.uk/eduans/cc/WWI/MedicalFront Books: The Pictorial History of World War 1; G. D. Sheffield. Trench Warfare 1914-18; T. Ashworth On the psychology of Military Incompetence; N. Dixon Armies in Europe; J. Gooch The Smoke and the Fire; J. Terraine The Face of the battle; J. Keegan History project; Medicine in WORLD WAR ONE. Jennie Bain 9cx ...read more.