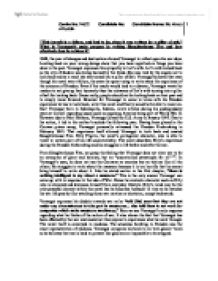 &quot;This (novel) is a failure, and had to be, since it was written by a pillar of salt.&quot; What is Vonnegut's main purpose in writing Slaughterhouse Five and how effectively does he achieve it?

"This (novel) is a failure, and had to be, since it was written by a pillar of salt." What is Vonnegut's main purpose in writing Slaughterhouse Five and how effectively does he achieve it? 1968, the year of changes and destruction allowed Vonnegut to reflect upon his war days. Looking back on your wrong doings show that you have regretted on things you have done in the past. Vonnegut expresses this sympathy to Lot's wife. Lot's wife looked back as the city of Sodom was being burned by the Gods. She was told by the angels not to look back and as a result she was turned into a pillar of Salt. [A1]Vonnegut believes that even though his novel was a failure, the years he spent trying to write about his experience of the outcome of Dresden. Even if the results would lead to a disaster, Vonnegut wants his readers to not give up their humanity thus the relevance of Lot's wife turning into a pillar of salt for looking back. Cause really, people should not be looking back on their past and to simply move forward. However for Vonnegut to come to terms with his Dresden experience he has to look back, write this novel and finally would he be able to move on. Kurt Vonnegut born in Indianapolis, Indiana, wrote articles during his undergraduate years at Cornell regarding issues such as opposing America being part of World War II. However due to Pearl Harbour, Vonnegut joined the U.S. Army in January 1943. ...read more.

The novel is written to centralise on Billy's war experiences and his life in such a juxtaposed structured, it illustrates his dislocation and alienation he felt after the war. The passage not only shows that the Tralfamadorians have a "deterministic view" [4] and that every moment is beyond their control, it's just that they lack the awareness of the possibility of free will. Here Vonnegut tries to imply the idea of inevitability. How things happen without a logical reason as to why it does. [A8] The style that Slaughterhouse Five is written very much different to most common novels that other authors uses. The use of post-modernism technique is used such as the repetition of "So it goes" which is used at any relevance of death, making all death whether it is natural, accidental, or intentional to be appearing equal death. The concept was materialized by the Tralfamadorians as their view on death is simply an idea of a person being at a bad state at that particular moment yet alive in other moments of their lives. Also, the fact that the phrase is repeated numerous of times throughout the novel represents the tally of death, hence the tragic inevitability of death. Billy himself "has seen his own death many times" yet he does nothing about it shows that death is inevitable. The idea of death displayed in the novel is "devoid of sadness of blame" [1] yet it embraces the inevitability of it. Therefore in the novel, Vonnegut displays death to be a small part that everyone would eventually experience in life. ...read more.

The notion of being 'stuck' implies the limit we as human beings have in our freedom. I do believe that we may just be stuck as life is generally inevitable, things cannot be controlled, that our fate may have just been laid out for us. Vonnegut may have expressed this notion so that we as the readers tackle the idea of creating our own fate, our way of living life, to be independent and think on our own two feet. He may very well believe that we are all just stuck in amber, and things happen for a reason. Even though they may not be justified nor reasonable, certain things are unavoidable and we should simply learn to accept it. Also that even though war can not be prevented, but to note treat it lightly or view it as a heroic image, as nothing to do with death would appear glorified. Vonnegut expresses the death numerous of times throughout the novel; 'so it goes' which reflects how there is always someone out there dying due to any kind of death. He stressed the volume of destruction he has witnessed. And nothing can be said about a massacre except for a quiet sound of a bird 'poo-tee-weeting'. We all have a sense of free will within us; we have the right to choose. We should live every moment as though we might not be awake for tomorrow. To cherish the simplest thing in life and never to take things for granted. We only get to live once, unlike Billy Pilgrim who is able to travel through time. I personally believe that Vonnegut may be conveying a message that asks of us to retain our humanity, to not allow anyone or anything control our personalities. ...read more.