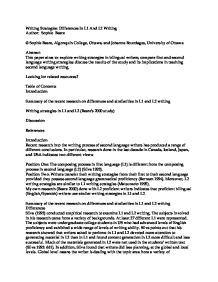 The research was guided by two questions: What writing strategies are used in facilitating content generating and planning during writing by proficient bilingual writers? Are the writing strategies in L1 writing different from L2 writing in the context of content generating and planning? To provide an overall idea about their writing strategies in L1 and L2, the subjects were interviewed before and after their two writing sessions. They were required to write two essays: one in their first and one in their second language. The time given for each session was two hours. Think-aloud protocols were used during the writing sessions. Results and analysis The transcripts from the think-aloud protocols were analyzed. First, the utterances were colour-coded according to what the subject was saying. The categories for planning were based on a modified Haas' (1989) model. If the subject said, 'How do I develop this idea?' - the statement was classified as conceptual planning. If the subject said, 'How do I say that?' - the statement was classified as rhetorical planning. In answer to the first research question, it was found in content generating that the strategies used were writing drafts, brainstorming, rereading, asking the researcher a question, using the topic, using both languages interchangeably. ...read more.

c*****g (1989) points out that as proficiency in the language improves, the writer 'becomes better able to perform in writing in his/her second language, producing more effective texts.' (c*****g 1989: 118) Thus, if writers are highly proficient in their second language, especially knowledgeable about the rhetorical structure in their second language, and experienced in writing in their first language, the transfer of skills may be expected. Proficient writers do not translate from L1 to L2 (Matsumoto 1995). 'It is conceivable that whatever thought a writer generates before writing can be expressed in a variety of ways not tied to a particular language. It would follow that, to the extent that thoughts are transferable across languages, people should be able to apply the skills and knowledge that they have acquired in their first language writing to their L2 writing' (Berman 1994: 30). In conclusion, the above findings of the described research are applicable to the language groups under enquiry. Caution must be taken when one applies the findings to the second language learners who are still in process of learning and may not possess full proficiency of the second language; therefore, the expectancies of transfer of skills have to be modified depending on the context. ...read more.