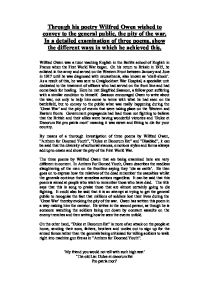 Through his poetry Wilfred Owen wished to convey to the general public, the pity of the war. In a detailed examination of three poems, show the different ways in which he achieved this.

Through his poetry Wilfred Owen wished to convey to the general public, the pity of the war. In a detailed examination of three poems, show the different ways in which he achieved this. Wilfred Owen was a tutor teaching English in the Berlitz school of English in France when the First World War began. On his return to Britain in 1915, he enlisted in the army and served on the Western Front between January and June in 1917 until he was diagnosed with neurasthenia, also known as 'shell-shock'. As a result of this, he was sent to Craiglockhart War Hospital, a specialist unit dedicated to the treatment of officers who had served on the front line and had come back for healing. Here he met Siegfried Sassoon, a fellow poet suffering with a similar condition to himself. Sassoon encouraged Owen to write about the war, not only to help him come to terms with what he had seen on the battlefield, but to convey to the public what was really happening during the 'Great War' and the pity of events that were taking place on the Western and Eastern fronts. Government propaganda had lead those not fighting to believe that the British and their allies were having wonderful victories and 'Dulce et Decorum Est pro patria mori' meaning it was sweet and fitting to die for your country. ...read more.

'The pallor of girls brows shall be their pall' This quotation is showing that although the dead shall not be buried formally, the paleness of girl's brows will be the cloth on their coffin. The long 'a' sound in 'pall' also slows down and saddens the reader. The line shows that the generals may be letting their men get mown down by the enemy, proving the pity of the war, but they will always be remembered their relatives. Like the previous poem, "Dulce et Decorum Est" also has a highly shocking first line: 'Bent double, like old beggars under sacks' It is the exact opposite of the general public's belief that the soldiers stood tall, doing their country proud. Also the 'b' and 'd' sounds are soft and could be showing the slow panting of the soldiers as they trudged through the thick mud. There are also strong lines used in the rest of the poem. 'And watch the eyes writhing in his face, His face hanging, like a devil's sick of sin' Owen uses extremely strong and slightly hyperbolical imagery to really get across how pitiful the war really was. The 'w' sounds in the first line of this quotation are quite similar to the screaming sounds that the dying soldier might be producing as the gas eats away at his body, whilst the 's' sounds in the second line of this extract could be referring to the hissing of the gas shells. ...read more.

The bitterness returns in the concluding three lines as the same sharp sound return. The final lines say 'Dulce et decorum est pro patria mori' and the bitter consonants make it sound as though the writer is struggling to say this as he finds utterly false. "Disabled" is not quite so bitter, but is an honest look at the main character and is much sadder than "Anthem for Doomed Youth" or "Dulce et Decorum Est". It is much more emotional and he speaks how of 'he will never feel again how slim girls waists are'. The effect that this has on the reader is that of empathy and feeling sorry for the man who has lost his limbs. This is the overriding emotion in "Disabled" and shows the pity of the war by showing the damage it can do to just a single person. In the preface for Owen's collection of poems, he writes clearly what his aim was: to show the pity of the war. In the above study of the three poems, "Anthem for Doomed Youth", "Dulce et Decorum Est" and "Disabled", it can be said that the difference of authorial stances, styles, poetical forms and the creation of emotions, from great sadness to immense resentment and fury, always add up to generate and prove the pity of the First World War. ...read more.