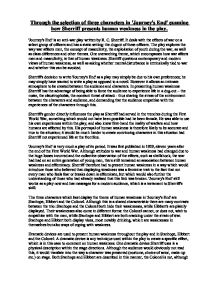 Through the selection of three characters in 'Journey's End' examine how Sherriff presents human weakness in the play.

Through the selection of three characters in 'Journey's End' examine how Sherriff presents human weakness in the play. 'Journey's End' is an anti-war play written by R. C. Sherriff. It deals with the effects of war on a select group of officers and has a static setting: the dugout of these officers. The play explores the way war affects men, the concept of masculinity, the exploitation of youth during the war, as well as class differences and other themes. One overarching theme, which encompasses how war affects men and masculinity, is that of human weakness. Sherriff questions contemporary and modern views of human weakness, as well as asking whether mental disturbance is intrinsically tied to war and whether this can be avoided. Sherriff's decision to write 'Journey's End' as a play may simply be due to his own preferences; he may simply have wanted to write a play as opposed to a novel. However it allows an intimate atmosphere to be created between the audience and characters. In presenting human weakness Sherriff has the advantage of being able to force the audience to experience life in a dug-out - the noise, the claustrophobia, the constant threat of attack - thus sharing the stress of the environment between the characters and audience, and demanding that the audience empathise with the experiences of the characters through this. Sherriff's gender directly influences the play as Sherriff had served in the trenches during the First World War, something which would not have been possible had he been female. ...read more.

and this seems to be, from the frequent references, a common occurrence. This suggests both that drinking itself is a weakness of Stanhope's, but also that it is driven by the stress placed on him by his role in the army and within the war itself. It is therefore possible to surmise that Stanhope is trapped in a cycle: he drinks to cope with his 'weaknesses' regarding his inability to cope with the pressures placed on him by the war, but he also drinks because he is so used to it. Stanhope appears to be an alcoholic, although there is a clear reason for his alcoholism. Hibbert also drinks, but his motivations seem different from Stanhope's. He does use alcohol as a coping mechanism; when he tells Stanhope the real reason he wants to leave the trenches, becoming hysterical in the process, he gladly "takes the mug [of whisky] and drinks" as a way to calm himself down. Yet Hibbert seems to drink more socially than Stanhope; at the beginning of Act Three Scene Two he, Stanhope and Trotter are drinking from "two champagne bottles" and Hibbert's "high-pitched and excited" (and frequent) laughter suggests that he is drunk, but also that he is eager to please Stanhope by laughing at his jokes. This implies that Hibbert is keen to fit in and, factoring in his vain appearance, it seems as though other's opinions matter highly to him. This is another aspect of Hibbert's weakness, as well as the vice of drinking. ...read more.

He speaks in short, commanding sentences, as befitting a senior officer. His short sentences and brief answers to Stanhope, such as "Yes. I suggested that." and "I'm afraid not. It's got to be done." also convey that he doesn't wish to discuss what Stanhope is talking about (the raid). The abrupt effect this gives his speech fits with the previous conclusion that he wishes to ignore the dangers the soldiers face, and additionally implies that he is, to a degree, incapable of sympathising with Stanhope and others' views. In 'Journey's End', Sherriff challenges commonly-held views of human weakness. He shows the audience through the character of Stanhope that even if someone appears outwardly strong and in control, they can still be considered 'weak'. He challenges the very concept of weakness, arguing through the prevalence of classically 'weak' behaviour in the play that what many people would have considered as being weak at the time the play was written and performed is in fact a perfectly logical response to war and combat situations. The view of weakness as being effeminate is also shown to be false through the fact that both Stanhope and Hibbert, such as when he says that he would rather die than go back into the trenches, can behave courageously, which is generally seen as a masculine characteristic. Sherriff also seems to conclude that mental disturbance is linked to warfare and, through the character of the Colonel, voices the opinion that this is partly because the officers do not see the soldiers as real people, but as pawns on a chessboard. Overall, Sherriff presents human weakness as something we all suffer from, albeit in different forms. ...read more.