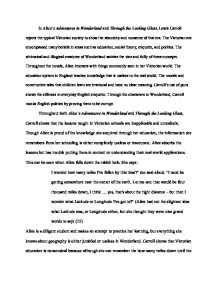 Throughout both Alices Adventures in Wonderland and Through the Looking Glass, Carroll shows that the lessons taught in Victorian schools are inapplicable and unrealistic.

In Alice's Adventures in Wonderland and Through the Looking Glass, Lewis Carroll rejects the typical Victorian society to show the absurdity and nonsense of that era. The Victorian era encompassed many beliefs in areas such as education, social theory, etiquette, and politics. The whimsical and illogical creatures of Wonderland satirize the vice and folly of these concepts. Throughout the novels, Alice interacts with things commonly seen in her Victorian world. The education system in England teaches knowledge that is useless to the real world. The morals and constructive tales that children learn are irrational and have no clear meaning. Carroll's use of puns shows the silliness in everyday English etiquette. Through the characters in Wonderland, Carroll mocks English politics by proving them to be corrupt. Throughout both Alice's Adventures in Wonderland and Through the Looking Glass, Carroll shows that the lessons taught in Victorian schools are inapplicable and unrealistic. Though Alice is proud of the knowledge she acquired through her education, the information she remembers from her schooling is either completely useless or inaccurate. Alice absorbs the lessons but has trouble putting them in context or understanding their real-world applications. ...read more.

Just like the Duchess' chin, her morals metaphorically "dig" into Alice and the reader. The world of Wonderland resists a moral interpretation of things, unlike the world of Victorian England. Lewis Carroll uses parodies of academic subjects to show the corruption in the Victorian education. When explaining the difference in his education with that of Alice, the Mock Turtle replies, "Reeling and Writhing, of course, to begin with,...and then the different branches of Arithmetic - Ambition, Distraction, Uglification, and Derision" (110). These are all parodies of the subjects learned in school: reading, writing, addition, subtraction, multiplication, and division. Carroll argues, however, that all the sardonic subjects listed are learned in school as well; competing for grades teaches ambition, many things distract students from studying, and there is derision among peers. Lewis Carroll's mockery of the Victorian education system shows the corrupt side of children's erudition because they learn bad habits and behaviors. Lewis Carroll makes fun of the Victorian attitude towards several customs to show the absurdity and silliness of the social protocol. He uses puns to satirize the etiquette and behavior of people. ...read more.

However, when they had been running half an hour or so, and were quite dry again, the Dodo suddenly called out `The race is over!' and they all crowded round it, panting, and asking, `But who has won?' (35). The animals run randomly in circles, progress nowhere, and capriciously stop without any clear conclusion. A caucus is a private political meeting among party members. Carroll implies that politicians do the same as the characters; they flaunt grandeur and circumstance without actually accomplishing anything. Carroll's satirical description of Wonderland shows the madness in the Victorian era. The silliness and nonsense that surrounds the characters in Wonderland parallel the foolishness in the real world. The lessons taught in Victorian schools prove to be inapplicable, which can be seen when Alice does not fully understand the concept of geography. The satirical description of the Duchess shows that morals of things are foolish and do not make sense. Carroll's mockery of Victorian etiquette and behavior show the absurdity of their social protocol. The little progression made in the caucus race is consistent with the little accomplishment made by politicians. ...read more.