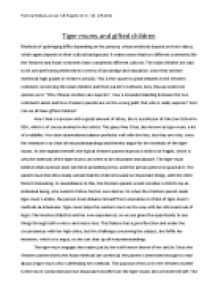 Tiger mums and gifted children. Analysis of the ideas of Amy Chua

﻿Patricia Mellany Jensen 3.B.Engelsk stil nr. 1D. 2/9-2012 Tiger-mums and gifted children Methods of upbringing differ depending on the parents, whose methods depend on their values, which again depend on their cultural background. It makes sense that two different continents like the Western and Asian continents have completely different cultures. The Asian children are said to be overperforming themselves in terms of knowledge and education, since they achieve extremely high grades in Western schools. This is the cause for great debates in the Western continent concerning the Asian children and their parent?s methods. Amy Chua provides her opinion as to ?Why Chinese mothers are superior?, how a misunderstanding between the two continents exists and how Western parents are on the wrong path. But who is really superior? And can we all have gifted children? Amy Chua is a person with a great amount of ethos; she is a professor at Yale Law School in USA, which is of course marked in her article. ...read more.

The purpose of this is for the Western mother to feel more connected (and not dissociate herself) from the tiger-mums she will meet herself. The tiger-mum also narrows down boring logos information in form of numbers, so that she can involve more interesting personal stories (pathos) from her everyday life. Tiger-mum?s methods surely seem tempting and promising, but the future is hard to foresee if we were all to become tiger-mums. The increase in the number of intelligent and cultured children would mean more competition, since the intelligence and working standard would rise and therefore more would be demanded, so only few can achieve excellence. This would increase the pressure upon the children, who in theory continuously would be paced forward. This would obviously demand more of the children?s time and probably result in an unhealthy physical and emotional circle. If everyone wants to excel, even though everyone cannot excel, because then the point of excellence would just be average, children would really feel low self-esteem. ...read more.

If the child wants to give up, the parent should express disappointment because one should never give up on a personal goal. A personal goal would also make the child more interested in reaching it. It is not someone else?s goal, so we should be able to find the strongest character here. We can all become tiger-mums like Amy Chua, but we cannot all become the best, since it would just increase the average level and result in low self-esteem, since everyone now wants to be the best. So even though tiger-mum?s methods work for her, it would not work for all of us. But tiger-mum fulfils her intention, which is to remove all misunderstandings and prejudice concerning tiger-mums and Western parenting methods (despite continental differences). She does this with a twist of logos and pathos, in which the latter mentioned, is the key to her success, since it makes people interested enough to care. But the superior raising method is not to be found in one of the continents, but by combining the two methods, like in every other case where you combine the merits. ...read more.