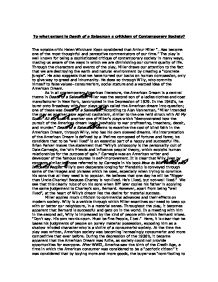 To what extent is Death of a Salesman a criticism of Contemporary Society? The notable critic Helen Wickham Koon considered that Arthur Miller "...Has become one of the most thoughtful and perceptive commentators of our time." The play is well known for being a sophisticated critique of contemporary society in many ways, making us aware of the ways in which we are diminishing our current quality of life. Through the characters and events of the play, Miller draws our attention to the fact that we are destroying the earth and natural environment by creating a "concrete jungle". He also suggests that we have turned our backs on human compassion, only to give way to greed and inhumanity. He does so through w***y, who commits himself to false values- consumerism, social stature and a warped idea of the American Dream. As in all contemporary American literature, the American Dream is a central theme in Death of a Salesman. Miller was the second son of a ladies clothes and coat manufacturer in New York, bankrupted in the Depression of 1929. In the 1940's, he burst onto Broadway with four plays which called the American dream into question; one of these was Death of a Salesman. According to Alan Vanneman, "Miller intended the play as another blow against capitalism, similar to the one he'd struck with All My Sons." All my sons is another one of Miller's plays which "demonstrated how the pursuit of the American dream leads inevitably to war profiteering, treachery, deceit, and murder." ...read more.

During the depression of the 1930's, it became apparent that the American Dream was futile, as society could not provide opportunities for everyone. After WWII, America saw the birth of the Credit Age, a time in which the American consumer was considered to be a "patriotic citizen" it was considered that by buying more and more goods, the buyer was "contributing to the ultimate success of the American way of life." It is the Historian Helen Cohen who expresses this, along with the fact that in post WWII America, "The good purchaser devoted to 'more, newer and better' was the good citizen." In the passage in which w***y and Linda discuss their financial situation in act one, it becomes clear to us that although the Loman's are desperately poor, they are striving to pay for items which they already have; the refrigerator, washing machine, vacuum cleaner and the car. w***y constantly worries about paying the instalments for these items, as was the case for many Post WWII Americans. The Lomans chose their "Hastings Refrigerator" purely because "they got the biggest ads of any of them". We recognise that through mentioning brand names, Miller is using a realist technique which lends authenticity to the staging of the play. w***y prides himself on the fact they he owns a Chevrolet, apparently the "greatest car ever built" that is, until it needs repair, when he says, "That goddam Chevrolet, they ought to prohibit the manufacture of that car!" ...read more.

In the stage directions before the first act, "we are aware of the towering, angular shapes...surrounding the house on all sides." The claustrophobic setting reminds us of the damage that modern life is doing to the environment. w***y points out that the destruction of the trees and the wild fragrances of lilac and wisteria are the result of developers who "massacred the neighbourhood." He also mentions that "The streets are lined with cars, there's not a breath of fresh air in the neighbourhood." Crucially, the setting is a realist technique (Miller uses it to reflect the period of the play), but it could also be taken as another criticism of the society. As his mind begins to deteriorate, w***y becomes obsessed with growing vegetables in the garden, but indicates that "the grass don't grow anymore, you can't raise a carrot in the backyard." And so his dream of growing something in the garden becomes one which is doomed to failure. Joyce Carol Oats points out that in the Twenty-First century; it seems evident that society has become an "ever more frantic, self-mesmerized world of salesmanship." Miller reveals our consumer culture "public relations" as a euphemism for pretence, deceit and fraud. w***y Loman is a salesman, one of his sons a thief, and the other a lying womaniser. Miller suggests that these are all contemporary figures to whom "attention must be paid." Through this, we see that he has written the tragedy that illuminates the dark side of American success. ...read more.