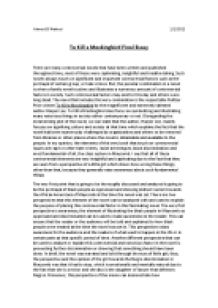 To Kill a Mockingbird Themes

﻿Ahmed El Wakeel 1/1/2012 To Kill a Mockingbird Final Essay There are many controversial novels that have been written and published throughout time; most of those were captivating, insightful and breathe-taking. Such novels always touch on significant and important controversial factors such as the portrayal of certain group, or hate crimes. But, the peculiar combination in a novel is when a family novel touches and illustrates a numerous amount of controversial factors in society. Such controversial factors may exist to this day and others were long dead. The novel that includes this very combination is the respectable Pulitzer Prize winner To Kill a Mockingbird by the magnificent and extremely talented author Harper Lee. To Kill a Mockingbird does focus on symbolizing and illustrating many notorious things in society either contemporary or not. Disregarding the mesmerizing plot of the novel, we can state that the author, Harper Lee, mainly focuses on signifying culture and society at that time which explains the fact that the novel had been numerously challenged by organizations and others to be removed from libraries or other places where the novel is obtainable and available to the people. In my opinion, the elements of this very book that touch on controversial issues are r**e or other hate crimes, r****t stereotypes, black discrimination and most fundamental of all, the class system in Maycomb. ...read more.

Lee approaches class from a more complex perspective, due to the fact that she demonstrates how issues regarding class or gender or race intensify chauvinism, bigotry and prejudice. In general, having a social class or a class system to be more specific is socially very dangerous for it creates gaps between the people and loopholes in the concept of equality between everyone in society. In addition to creating gaps in society and the concept of equality between people, a class system also causes numerous perilous concepts in the community like stereotypes. Stereotypes are stalwartly implemented in the mentalities of members of the community in a certain area due to having a class system. A perfect example from this phantasmagorical novel is the prejudice and stereotypes that caused the conviction of Tom Robinson; because if it wasn?t for having a class system and considering Negros a lower part of the community or the society in Maycomb Tom Robinson may have been trialed differently and the verdict may have altered paths instead of causing the death of a father, a husband and a human being. Not only the black people in Maycomb face the set-backs and disadvantages of the class system but also the stereotypes caused by the class system affect other members of society due to their gender or age; an example is when Aunt Alexandra talks and discusses ...read more.

After all these examples and evidence, I can come to conclude that the factor of the loss of innocence regarding children is fundamental and important towards understanding the message of the novel, and also that it touches on important controversial and notorious factors in our contemporary culture. Moreover, there are a lot of factors and elements in the novel that may have caused controversial tension such as n***o discrimination, social class system, loss of innocence, hate crimes and other notorious elements that were illustrated into the pages of the novel by the brilliant Harper Lee. It is now clear that these factors of the novel are fundamental to the understanding of the novel, it is also clear that they strongly touch on controversy on contemporary and modern culture. I can come to state this piece de resistance and phantasmagorical magnum opus of literature has succeeded in portraying many notorious and captivating elements of culture on paper and other than that, it illustrates a bravura plot and that is spoken through the eyes of a little girl. Lee has done a wonderful job by portraying such events in the eyes of a little girl, other than that I can come to state that this novel is simply phantasmagorical. ...read more.