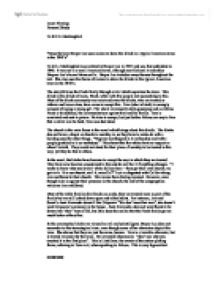 "Describe how Harper Lee uses racism to show the divide in a typical American town in the 1930's" To kill a Mockingbird was written by Harper Lee in 1957 and was first published in 1960. It was set in a small American town, although non-fictional it resembles Harpers Lee's home Monroeville. Harper Lee includes many themes throughout the text. She also uses the theme of racism to show the divide in this typical American town in the 1930's. The story follows the Finch family through a trial which separates the town. This divide is the divide of races. Black, white with few people not succumbing to this. Most of the black community are racist and even the blacks, who are treated as inferior and lower class, have come to accept this. Tom (who is black) is wrongly accused of raping a young girl. The whole community starts gossiping and as Atticus Finch is his defence, the community turn against him and his family. ...read more.

In the community, blacks are viewed as evil and unintelligent, Harper Lee does not surrender to this stereotypical view, even though some of her characters depict this view. She shows that they are just the same, human. Tom is a loveable character, but is treated viciously by the town. He is treated inhumanely. "don't see why you touched it in the first place". This is Link Deas, the owner of the cotton-picking farms, referring to Tom as it, when speaking to Atticus. This is very hypocritical since he gave Tom and his wife support and work during the tough times they found. This shows that the people in the community can be very deceitful, or only behave in this manner so that they will not be spoken about too. During the trial, Tom is frowned upon. The court room is divided with a "coloured balcony". The way the blacks entered the court room emphasises the segregation between the blacks and whites. ...read more.

Outside they meet Dolphus Raymond, who also disagrees with the whole situation. He knows exactly why Dill is crying "Cry about the Hell white people give coloured - without even thinking. Cry about the hell white people give coloured, without even stopping to think that they're people too". He knows that Tom, Calpurnia and all of the black community are exactly the same, with one exception, their skin colour. I find it hard to believe that people can be so narrow minded but it is there, everywhere you go. Someone is being discriminated for one thing or another. I think Harper Lee portrays this well, and even though it was written around 50 years ago, it still happens. This story still relates to the present. She uses the strength of a few characters to get this message across. The town is divided but few people are not confined to either side, in the middle trying to get others to see sense. If they could show a few people the error of their ways it would make a difference. Just like in reality. ?? ?? ?? ?? Laura Fleming Personal Study To Kill A Mockingbird 02/08/2009 ...read more.