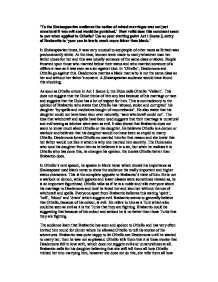 'To the Shakespearian audience the notion of mixed marriages was not just unnatural it was evil and would be punished.' How valid does this comment seem to you when applied to Othello? Use as your starting point Act 1 Scene 3, entry of Brabantio to 'your

'To the Shakespearian audience the notion of mixed marriages was not just unnatural it was evil and would be punished.' How valid does this comment seem to you when applied to Othello? Use as your starting point Act 1 Scene 3, entry of Brabantio to 'your son in law is much more fairer than black.' In Shakespearian times, it was very unusual to see people of other races as Britain was predominantly white. At the time, women were made to marry whatever man her father chose for her and this was usually someone of the same class or above. People frowned upon those who married below their status and who married someone of a different race as it was seen as a sin against God. In 'Othello', Desdemona and Othello go against this. Desdemona marries a black man who is not the same class as her and without her father's consent. A Shakespearian audience would have found this shocking. As soon as Othello enters in Act 1 Scene 3, the Duke calls Othello 'Valiant'. ...read more.

Everyone apart from Brabantio believes this stating 'spirit', 'hell', 'blood' and 'dram' which suggest evil. Brabantio seems to generally believe that Othello, because of his colour, is evil. He refers to him as a Turk which also could be seen as evil as it is the Turks that they are fighting. Brabantio could be suggesting that because of his colour and actions he is no better than those Turks that they are fighting. The audience learn that Brabantio has seen and spoken to Othello and has very often invited him round for dinner where he allowed Othello to tell his stories of his adventures. Brabantio was quite happy to let Othello see Desdemona until he wanted to marry her, then he was not so pleased. Othello tells them that it is these stories that Desdemona fell in love with, which does not suggest evil and unnaturalness at all. Brabantio calls for his daughter believing that she will tell them all how Othello tricked her into marrying him, however she does not do this, she tells them all how she loves him. ...read more.

These insecurities may be the unnatural part of their marriage. The fact that Othello killed Desdemona may also be viewed as the evil in their marriage. Othello may have believed everything that Iago said and may have believed that Desdemona had committed those sins against him, but he did not need to kill her, he could have disbanded her and told her not to come back, but instead he took the view that if he cannot have her, nobody can which is evil and selfish. In conclusion, there is some evidence to suggest that Othello and Desdemona's marriage is unnatural and evil and should be punished. Both Othello and Desdemona seem to be punished as they are both killed. However, it could be argued that it was not their marriage that caused this but rather Iago's manipulation of Othello and everything around him. Therefore it seems that the statement is not completely true. If Iago had not manipulated the events in the play, then Othello and Desdemona may have been happily married, however no-one knows this for sure so it is hard to say one way or the other whether Desdemona and Othello's marriage was in fact 'evil and unnatural'. ...read more.