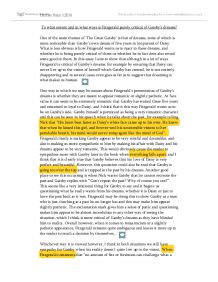 To what extent and in what ways is Fitzgerald purely critical of Gatsby's dreams?

To what extent and in what ways is Fitzgerald purely critical of Gatsby's dreams? One of the main themes of 'The Great Gatsby' is that of dreams, none of which is more noticeable than Gatsby's own dream of five years in his pursuit of Daisy. What is less obvious is how Fitzgerald wants us to react to these dreams, and whether he is being purely critical of them or whether he in fact does also reveal some good in them. In this essay I aim to show that although in a lot of ways Fitzgerald is critical of Gatsby's dreams, for example by ensuring that Daisy can never live up to the vision of herself which Gatsby has created, he is not entirely disapproving and in several cases even goes as far as to suggest that dreaming is what makes us human. One way in which we may be unsure about Fitzgerald's presentation of Gatsby's dreams is whether they are meant to appear romantic or slightly pathetic. At face value it can seem to be extremely romantic that Gatsby has waited these five years and remained so loyal to Daisy, and I think that it this way Fitzgerald wants us to be on Gatsby's side. ...read more.

This makes her seem a lot less human than Gatsby and we empathise with him far more, which I think Fitzgerald wants us to do. This suggests that Fitzgerald is supportive of 'the dreamer' and tells us that he is not opposed to the idea of dreams in general. In fact he associates the illusion with the phrase "colossal vitality" which again evokes the idea that dreams are linked with the essence of being human and that Fitzgerald views Gatsby's dreams with something other than pure criticism. One of the main criticisms which Fitzgerald does have of Gatsby's dreams is the materialism inherent with them. To gain Daisy's affections, Gatsby accumulates extortionate wealth and belongings to attract her, and Daisy herself represents something of the materialistic upper class which Gatsby strives to become a part of. This is very concisely put when Gatsby says of Daisy "her voice is full of money". Daisy's voice has particular prominence as a motif throughout the book but at this point it is almost a leit motif as it gains meaning. All we can judge Daisy by is her voice, we never know her thoughts or what she is really thinking as what she says is usually quite empty. ...read more.

I think that there is also a slight positive side to Fitzgerald's choice of making Daisy an unworthy dream, as it shows that everybody can be loved by someone, however this is not very strong as Gatsby does not love Daisy with her faults, and rather it seems that he is just immune to seeing her flaws. Fitzgerald in fact, is probably somewhere in between these views; he is not directly attacking dreams or even Gatsby's dreams, but he is more in this case attacking Daisy's character. Although it may be a large lack of judgement skills on Gatsby's side, we cannot blame him entirely and again we still feel sorry for him when Daisy does eventually let him down. Overall I think that it is clear that there is a strong sense of ambiguity when it comes to Fitzgerald's attitude to Gatsby's dreams. However, I feel that the main point he wishes to make is that there is nothing wrong with dreaming, you just have to be careful when choosing your dreams that what you are longing for is actually worthwhile and won't end up hurting you more than it can make you happy. In Gatsby's case his aim appears to be more to make us feel sorry that he was so misguided in his choice of dream, rather than to berate him for dreaming at all. ?? ?? ?? ?? Harriet Blair 12EM ...read more.

This essay has some excellent moments and some over-generalised points. The structure is clear and the writing is fluent. Textual knowledge is evident but could be more wide ranging to develop the argument without resorting to vague comments about dreams. This essay has 5 star and 3 start moments!