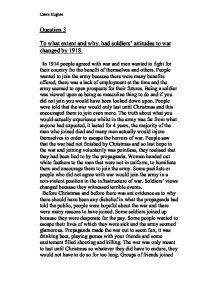 Question 3 To what extent and why, had soldiers' attitudes to war changed by 1918. In 1914 people agreed with war and men wanted to fight for their country fro the benefit of themselves and others. People wanted to join the army because there were many benefits offered, there was a lack of employment at the time and the army seemed to open prospects for their futures. Being a soldier was viewed upon as being as masculine thing to do and if you did not join you would have been looked down upon. People were told that the war would only last until Christmas and this encouraged them to join even more. The truth about what you would actually experience whilst in the army was far from what anyone had expected, it lasted for 4 years, the majority of the men who joined died and many men actually would injure themselves in order to escape the horrors of war. People saw that the war had not finished by Christmas and so lost hope in the war and joining voluntarily was pointless, they realised that they had been lied to by the propaganda. Women handed out white feathers to the men that were not in uniform, to humiliate them and encourage them to join the army. ...read more.

There is evidence that the prisoners awaiting death were angry and that their attitudes had changed because on the wall is written "fuck Haige" and "general Haige is a bastard". There is a poem called 'Dulce et Decorum est' this poem contains the emotions that the writer feels people should be feeling for the soldiers that suffered the gas shells of world war one. It says the gas killed many innocent people. It tries to convey the feeling that this produces, they want you to feel the sympathy that and gratitude that the soldiers deserve. Attitudes had obviously changed by the point that soldiers were creating horrific and insightful poems of this standard. World war one has become to be called Haig's war of attrition. This name means that the whole war was set in stone as one of failure and gradual decay of British soldiers and British morale to the fault of Haige. As the four years gruesomely passed with solitary rare victory and constant tragedy and bombardment, the commanders and few soldiers that lived through the horrific experience had no reason to heighten spirits or act in a victorious happy fashion, all they had to do was to become less and less hopeful. ...read more.

A higher social class or status would mean that your life is more important than those below you, the generals leading the war were more "important" than the soldiers fighting, so they did not consider whether it was fair or not to force the men to carry on fighting, all they believed was the more men we use the more likely it is that we will be victorious. Soldiers were told that they should be proud of what they were doing for it is glorious to fight for your country. A phrase that was often used was "for God, King and Country", this was meant to create a sense of loyalty and worthiness. If you fought for god you would be sent to heaven, fighting for your king you were a worthy member of society and fighting for your country meant you were passionate about your country which at the time was something to measure yourself to others with. Most of the country's attitudes changed, those didn't were na�ve and blind or had been a pacifist since the beginning. The attitudes that did change went from pride, hope and joy in killing another man to anger, sadness, bewilderment and foolishness. The people of Britain had been lied to and the outcome of this was extraordinary amounts of death, this is the ultimate punishment for humanity. Claire Hughes ...read more.