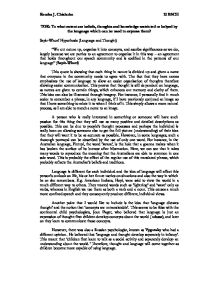 To what extent are beliefs, thoughts and knowledge restricted or helped by the language which can be used to express them?

TOK: To what extent are beliefs, thoughts and knowledge restricted or helped by the language which can be used to express them? Sapir-Whorf Hypothesis (Language and Thought) "We cut nature up, organise it into concepts, and ascribe significances as we do, largely because we are parties to an agreement to organise it in this way - an agreement that holds throughout our speech community and is codified in the patterns of our language" (Sapir-Whorf) This quote is showing that each thing in nature is divided up and given a name that everyone in the community needs to agree with. The fact that they have names emphasizes the use of language to allow an easier organisation of thoughts therefore allowing easier communication. This proves that thought is still dependant on language, as names are given to certain things, which enhances our memory and clarity of them. This idea can also be illustrated through imagery. For instance, I personally find it much easier to remember a phrase, in any language, if I have previously conjured an image so that I have something to relate it to when I think of it. This simply allows a more natural process, as I am able to match a name to an image. ...read more.

The ability for the French to borrow this language stresses the fact that language is independent on determining thought completely. Also in reference to the French language, I recently came back from a school exchange from France and while over there, I noticed something else about the language. It was simply that in this other language, they had many various words which were used to signify the one word that the English language used. For instance, the English word 'so' is just one word that has many different meanings but in the French language there is a word for each of these meanings. When we use 'so' like in the sentence "Let's give you some soup, so you can get warm.", the French use the word 'ainsi'. For the meaning of 'so' as in 'therefore' the French use the word 'donc'. Then, for the common meaning of 'so' as in 'well then', the French use the word 'allors'. Finally, when we use 'so' in the sense of 'and...' the French have another word which is 'bah'. Therefore, we can see that when we normally say 'so' to people we use it in the context that requires the other person to figure out which meaning we are intending. ...read more.

Of course you would feel it, and this is the same prospect for love. The emotion would still be there as love is more than a feeling; it's a state of mind. In conclusion, to some extent, I believe that beliefs, thoughts and knowledge are helped by the language used to express them. I think that the way people think can be very beneficial when used during explanations. I also think that the beliefs which various cultures possess will most likely have an effect on their language. Otherwise, I do not believe that they are completely helped by language as you are not able to fully express your feelings through them. Take for example, the quote "The limits of my language means the limits of my world." by Ludwig Wittgenstein. This shows that you can only think what you can express in your language. If you try to express your thoughts from your mother tongue into another language it can prove very difficult and this causes restrictions. I agree with this and feel as though you may even only be able to paraphrase your thoughts and you will therefore not be able to express the exact meaning that was originally intended. ?? ?? ?? ?? Kendra J. Chisholm 12 BSCH ...read more.