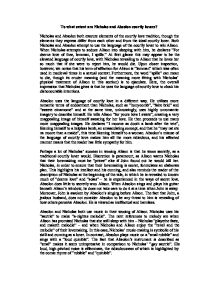 To what extent are Nicholas and Absolon courtly lovers?

To what extent are Nicholas and Absolon courtly lovers? Nicholas and Absolon both execute elements of the courtly love tradition, though the elements they express differ from each other and from the ideal courtly lover. Both Nicholas and Absolon attempt to use the language of the courtly lover to win Alison. When Nicholas attempts to seduce Alison into sleeping with him, he declares "For deerne love of thee, lemman, I spille." At first glance this may appear to be the elevated language of courtly love, with Nicholas revealing to Alison that he loves her so much that if she were to reject him, he would die. Upon closer inspection, however, we notice that his term of affection for Alison is "lemman" which was often used in medieval times in a s****l context. Furthermore, the word "spille" can mean to die, though its cruder meaning (and the meaning more fitting with Nicholas' physical treatment of Alison in this section) is to e*******e. Here, the overall impression that Nicholas gives is that he uses the language of courtly love to cloak his dishonourable intentions. ...read more.

in which he is revealed to known much of "deerne love" and "solas" - he is experienced in the ways of secret love. Absolon does little to secretly woo Alison. When Absolon sings and plays his guitar beneath Alison's window, he does not take care to do it at a time when John is away. Moreover, John is awoken by Absolon's singing before Alison. The fact that John, a jealous husband, does not consider Absolon to be any threat to him is revealing of how others perceive Absolon. He is viewed as ineffectual and harmless. Absolon and Nicholas both use music in their wooing of Alison. Nicholas uses his "sautrie" to make "a-nightes melodie". The next references to melody are when Alison has promised Nicholas that she will sleep with him - Nicholas "playethe faste, and maketh melodie" - and when Nicholas and Alison enjoy the "revel and the melodie" of their lovemaking. In this case, Nicholas' music-making is symbolic of his skill and cunning as a lover. In contrast, Absolon plays music on a "smal rubible" and sings with a "loud quinible". ...read more.

Traditionally, a courtly lover would expect to be rejected by his lady, until he had endured hardship and proved his love. Alison, in keeping with this tradition, rejects both Nicholas and Absolon. However, three lines after Alison demands that Nicholas remove his hands from her, she promises "That she wol been at his comandement". It seems that the reason Alison initially rejects Nicholas is to create another element of comedy, when she accepts him with indecorous speed. Alison's rejection of Absolon is violent, with her threatening to throw a stone at him. Making threats of violence is not a ladylike way to behave, and this further emphasises the fact that Alison is not worthy to be loved by a courtly lover. In conclusion, Nicholas adopts some elements of the courtly love tradition, but only to mask his crude motives. Absolon adopts more of the tradition's elements, but comes across as ridiculous and affected. He can not see that in order to win Alison he does not have to be a courtly lover, for love is not what she is interested in. She and Nicholas are both concerned with satisfying their animal appetites, and this is why Nicholas' wooing of Alison is successful. ...read more.