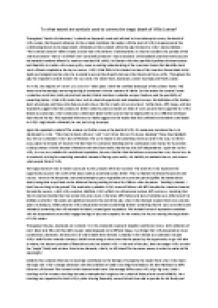 ﻿To what extent are symbols used to convey the tragic death of w***y Loman? Throughout ?Death of a Salesman,? symbols are frequently used and referred to in an attempt to convey the death of w***y Loman, the frequent reference to the symbols reinitiates the reader with the level of w***y?s depression and the contributing factors to his tragic death. Ultimately all the symbols within the play link back to w***y?s main ambition ? ?The American Dream? Miller creates a sense that w***y believes wholeheartedly in what he considers the promise of the American Dream?that a ?well liked? and ?personally attractive? man in business will indubitably and deservedly acquire the material comforts offered by modern American life. Oddly, his fixation with the superficial qualities of attractiveness and likeability is at odds with a more gritty, more rewarding understanding of the American Dream that identifies hard work without complaint as the key to success. w***y?s blind faith in his stunted version of the American Dream leads to his rapid psychological decline when he is unable to accept the disparity between the Dream and his own life. ...read more.

His inability to maintain the car, only lessen what people think of w***y. The tragic death of w***y is further conveyed by the symbolic reference to seeds. The seeds for w***y represent the opportunity to prove the worth of his labor, both as a salesman and a father. They symbolize his dreams for growth and success. However his desperate, nocturnal attempt to grow vegetables on a concrete patch signifies his shame about barely being able to put food on the table and having nothing to leave his children when he passes. "Nothing?s planted. I don?t have a thing in the ground" The seeds also symbolize w***y?s sense of failure with Biff. Despite the American Dream?s formula for success, which w***y considers infallible, w***y?s efforts to cultivate and nurture Biff went awry. Realizing that his all-American football star has turned into a lazy b*m, w***y takes Biff?s failure and lack of ambition as a reflection of his abilities as a father. The seeds are significant towards the end of the play when w***y attempts to plant them in a concrete patch. ...read more.

The stockings also represent this lavish lifestyle of hotel rooms and new items that w***y thinks he leads and provides the reader with a stark contrast with the actual life w***y leads. Finally the rubber hose is used throughout the play to act as a symbol and a constant reminds to the audience of w***y?s desperate attempts at suicide. He has apparently attempted to kill himself by inhaling gas, which is, ironically, the very substance essential to one of the most basic elements with which he must equip his home for his family?s health and comfort?heat. Literal death by inhaling gas parallels the metaphorical death that w***y feels in his struggle to afford such a basic necessity. Collectively, the symbols used and the sheer amount that they are used, reinforce w***y?s tragic dream and deluded sense of what is real and what is not, by doing so the blur between reality and dreams are brought together and the audience is allowed to not only see what brought about w***y?s downfall but feel a sense of pity, sympathy and to a certain extent fear (for w***y health) these, Aristotle claims to be the key to a tragedy, therefor they convey the tragic death of w***y Loman. ...read more.