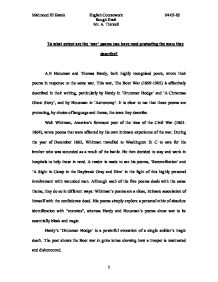 To what extent are the 'war' poems you have read protesting the wars they describe?

To what extent are the 'war' poems you have read protesting the wars they describe? A.E Housman and Thomas Hardy, both highly recognised poets, wrote their poems in response to the same war. This war, The Boer War (1899-1902) is affectively described in their writing, particularly by Hardy In 'Drummer Hodge' and 'A Christmas Ghost Story', and by Housman in 'Astronomy'. It is clear to me that these poems are protesting, by choice of language and theme, the wars they describe. Walt Whitman, America's foremost poet of the time of the Civil War (1861-1864), wrote poems that were affected by his own intimate experience of the war. During the year of December 1862, Whitman travelled to Washington D. C to care for his brother who was wounded as a result of the battle. He then decided to stay and work in hospitals to help those in need. A reader is made to see his poems, 'Reconciliation' and 'A Sight in Camp in the Daybreak Gray and Dim' in the light of this highly personal involvement with wounded men. Although each of the five poems deals with the same theme, they do so in different ways: Whitman's poems are a close, intimate association of himself with the confederate dead. ...read more.

to some Southern tree, and strange-eyed constellations reign his stars eternally' The stars at first were strange, now they look down on his burial, as 'His stars'. Trees grow out of the ground in which he was buried, acting as a memorial. We know that through the third stanza, 'His homely Northern breast and brain grow to some southern tree'. Nature seems to emend mankind's mistakes, recognising him with the memorial he deserves: 'Yet portion of that unknown plane will Hodge forever be'. Hardy suggests nature's response to the death of one soldier in the war and ironically contrasts man's neglect. It is the image of the isolated soldier and how nature takes care of him that makes a reader understand the moral of the poem. The poet shows to what extent the war is a waste. In Hardy's, 'A Christmas Ghost Story', his subject is again a deceased soldier. To fully engage with the poem, the reader must assume he or she is British. It starts out with 'South of the line, inland from far Durban', immediately establishing the sense of a soldier far from home. Hardy personalises the audience allowing them to connect deeply with the soldier. ...read more.

The poet especially sees life in the dead child, calling him 'sweet and darling'. His intense regard for the child, who he, ironically, describes as 'blooming', showing how affectively Whitman sees his subjects. In conclusion, readers infer that all poems mentioned deal with the same theme and present the same moral. They deal with soldiers who have lost their lives as a result to the war, there deaths may not seem for a cause in all five poems. They contain a different historical context. Hardy portrays war as a wasteful event when he links himself to Jesus, who's death was meaningful. He shows readers how man neglects those in need and how nature plays the role of our mother, through both of his poems. Whitman, again visualilses death as waste yet he personally engages with the victim of the war. This contrast can be as a result of him 'nursing' the injured and dead during the time of the Civil War. He brings life to the dead and responds to them himself, whereas Hardy allows nature to respond to the dead making his poem impersonal. I personally think all poems are very effective due to the contrast between the style of the poets. They allow us to see the effects of war in which they lived through two different approaches. Mahmoud El Hazek English Coursework 04-02-03 Rough Draft Mr. A. Thirkell 1 ...read more.