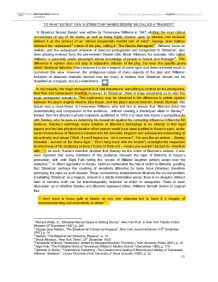 TO WHAT EXTENT CAN A STREETCAR NAMED DESIRE BE CALLED A TRAGEDY?

TO WHAT EXTENT CAN 'A STREETCAR NAMED DESIRE' BE CALLED A TRAGEDY? 'A Streetcar Named Desire' was written by Tennessee Williams in 1947, eliciting the most critical commentary of any of his works, as well as being highly divisive: upon its release, one reviewer defined it as the product of an "almost desperately morbid turn of mind"1; George Jean Nathan criticised the "unpleasant"2 nature of the play, calling it "'The Glands Menagerie'"3. Williams' focus on realism, and the subsequent omission of clear-cut protagonists and antagonists in 'Streetcar', also drew glowing reviews, from the pre-eminent theatre critic Brook Atkinson, for example, who called Williams "a genuinely poetic playwright whose knowledge of people is honest and thorough"4. This difference in opinion does not stop at subjective criticism of the play, but even the specific genre which 'Streetcar' falls into. Many assume it to be a tragedy of some type, and there is indeed much to commend this view. However, the ambiguous nature of many aspects of the play and Williams' inclusion of alternate dramatic devices has led many to believe that 'Streetcar' should not be classified as a tragedy, but as a melodrama. In any tragedy, the tragic protagonist is of vital importance: everything is centred on the protagonist, their flaw and subsequent downfall. However, in 'Streetcar', there is large uncertainty as to who this tragic protagonist actually is. ...read more.

This is arguably Stanley's lowest point, as Stanley has alienated Stella, leading to one of the iconic moments in American drama: Stanley's "heaven-splitting" cry of "STELLL-AHHHHH!" - an outburst of animal desperation. This moment, then (if 'Streetcar' is considered to be a battle between Blanche and Stanley for Stella's affections), is a victory for Blanche. However, in Scene Ten, the roles are reversed: Blanche's telephone call for help is unsuccessful, and she is arguably at her lowest point of the play here, as Stanley shatters all her illusions and pretensions ("Not once did you pull any wool over this boy's eyes!"), uncovering her multitude of lies, which makes Blanche face the reality of the threat Stanley poses to her (i.e. anagnorisis). So, while it is plain that 'Streetcar' is by no means a classical tragedy, it does include facets of tragedy as defined by Aristotle's 'Poetics'. There is perhaps a more credible case for 'Streetcar' being a tragedy in a slightly broader sense: that is to say, encompassing the characteristics of modern domestic tragedy. Arthur Miller summed up the essence of domestic tragedy in his work "Tragedy and the Common Man": "It is time, I think, that we who are without kings, took up this bright thread of our history (tragedy) and followed it to the only place it can possibly lead in our time - the heart and spirit of the average man" 8. ...read more.

are representative of the outpouring of the truth, which distresses Blanche greatly). However, by far the clearest instance of mise-en-sc�ne and expressionism occurs in Scene Ten, when Blanche's is on the verge of insanity, at her most fragile, and Williams introduces highly melodramatic stage effects: "Lurid reflections appear on the walls around Blanche. The shadows are of a grotesque and menacing form... The night is filled with inhuman voices like cries in a jungle." All of these features of 'Streetcar' chart a departure from the tragic norm, instead moving very markedly towards melodrama: Williams' use of music such as the 'blue piano' and the Varsouviana Polka in particular is evidence of this, as melodrama was originally a name for a type of theatre with musical accompaniment. There can be little doubt, then, that 'Streetcar' contains aspects of tragedy, and yet does not conform to the Aristotelian definition of tragedy enough to be considered a classical tragedy, instead assimilating enough aspects of tragedy to be deemed a domestic tragedy. However, the melodramatic traits and general ambiguity with which Williams has imbued 'Streetcar' show that it is impossible to judge 'Streetcar' to be solely a tragedy. It is difficult to ascertain the genre which defines 'Streetcar'; it may be most prudent to think of 'Streetcar' as an intricate psychological melodrama with features of tragedy, but not as a pure tragedy. ...read more.

This is a very strong essay - well expressed, perceptive and effectively researched, showing an excellent knowledge of the text. Occasionally there is too much context at the expense of analysing text, but generally, this is a well balanced, superbly crafted commentary.