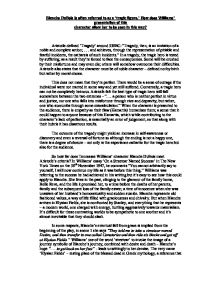 To what extent can Blanche Dubois be considered a tragic hero?

Blanche DuBois is often referred to as a 'tragic figure.' How does Williams' presentation of this character allow her to be seen in this way? Aristotle defined 'Tragedy' around 330BC: "Tragedy, then, is an imitation of a noble and complete action; . . . and achieves, through the representation of pitiable and fearful incidents, the catharsis of such incidents." In a tragedy, the tragic hero is tested by suffering; as a result they're forced to face the consequences. Some will be crushed by their misfortune and may even die; others will somehow overcome their difficulties. Aristotle also states that the character must be of noble character - defined not by birth but rather by moral choice. This does not mean that they're perfect. There would be a sense of outrage if the individual were not marred in some way and yet still suffered. Conversely, a tragic hero can not be completely heinous. Aristotle felt the best type of tragic hero will fall somewhere between the two extremes - ". . . a person who is neither perfect in virtue and justice, nor one who falls into misfortune through vice and depravity, but rather, one who succumbs through some miscalculation." When the character is presented to the audience, there is empathy as their flaw (Hamartia) humanises them; a sense that it could happen to anyone because of this Hamartia, which while contributing to the character's lack of perfection, is essentially an error of judgement, so that along with their hubris it has disastrous results. ...read more.

. ." she is in contrast to her surroundings and appears out of place. Williams states in his directions that "There is something about her uncertain manner . . . that suggests a moth." 'Moth' symbolic of the human soul, supports this sense of fragility and innocence, further emphasised by Blanche's "delicate beauty that must avoid a strong light." In the early scenes of the play, however, doubt begins to creep in as to Blanche's purported innocence - shown, for example, in the nuances in which her drinking habits are described; to Stella "No, one's my limit" and to Stanley "No, I - rarely touch it." The reasons for her drinking habit are not clear; but as the play unfolds it becomes obvious that Blanche drinks to forget, to blot out the ever present reminders of the past (symbolised in the play by the Polka music) and to lessen the guilt she feels for her husband's death and her promiscuity. Drinking allows her to create in her own mind a world full of romance and glamour, a world full of admirers. Similarly, Blanche's habit of taking long baths throughout the play, often as Stella explains to Stanley ". . . to quiet her nerves" is used by Williams to symbolise Blanche's attempt to cleanse herself of her guilt - in the same way that she drinks to try and forget the past, she bathes to wash away her guilt, to present herself as fresh and clean, free of the implications of her husband's death and her less than virtuous lifestyle. ...read more.

It seems that Blanche deceives those around her, but also herself. The use of the Chinese lantern over the lightbulb helps conceal Blanche's age. But Williams' uses the light to reveal more about Blanche's character - her interpretation of the truth - Blanche states that she doesn't want realism, she wants "magic." She admits she doesn't tell the truth; she tells ". . . what ought to be truth." Towards the end of scene 11 when Stanley tears the paper lantern from the lightbulb, Williams indicates Blanche represents the lantern. Stanley tears the lantern, tears Blanche; suddenly the truth is finally revealed. The audience sees this so that the conflicting images of Blanche allow the audience to be sympathetic to Blanche while realizing that she is a flawed human being. Stanley and all that he represents, emerges victorious. Donald Pease in Tennessee Williams: A Tribute, p840 states ". . . Flight forces the presence of the past on his characters as the presence of what they attempted to flee." Blanche is forced to leave Laurel and seeks refuge with Stella and Stanley only to be confronted with the realities of her promiscuity when Stanley exposes her for what she is. Blanche's fragile inner life is destroyed - the traditional world is forced to make way for the modern one. The tragedy lies in a character unable to reconcile the two. Whether Blanche survives by eventually coming to terms with this new age is unclear; what is clear is that Blanche is certainly a literary tragic figure. ...read more.

This is a very well presented essay. There is evidence of sharp insight into the play, especially the contradictions and evasiveness of Blanche's inner/outer lives and her fragile self pride and delusion. Quotations and text references are well chosen and effectively used.

The argument is closely developed throughout, leading to an effective conclusion, but this could have been improved by measuring the findings against the Aristotelian definitions of tragedy introduced in the first paragraph. Nevertheless, this is a very good essay.