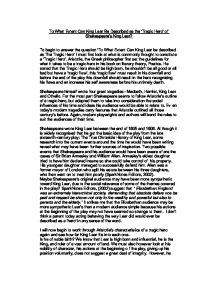 To What Extent Can King Lear Be Described as the Tragic Hero of Shakespeares King Lear?

To What Extent Can King Lear Be Described as the 'Tragic Hero' of Shakespeare's King Lear? To begin to answer the question 'To What Extent Can King Lear be described as The Tragic Hero' I must first look at what is commonly thought to constitute a 'Tragic Hero'. Aristotle, the Greek philosopher first set the guidelines for what it takes to be a tragic hero in his book on literary theory, Poetics. He stated that the Tragic Hero should be high born, he shouldn't be all good or all bad but have a 'tragic flaw', this 'tragic flaw' must result in his downfall and before the end of the play this downfall should result in the hero recognising his flaws and an increase his self awareness before his untimely death. Shakespeare himself wrote four great tragedies- Macbeth, Hamlet, King Lear and Othello. For the most part Shakespeare seems to follow Aristotle's outline of a tragic hero, but adapted them to take into consideration the social influences of his time and ideas his audience would be able to relate to. Even today's modern tragedies carry features that Aristotle outlined all those century's before. ...read more.

Lear's downfall is truly of epic proportion; he goes from being the most powerful man in the country to what is essentially a homeless madman wondering the moors. Goneril and Regan conspire to completely undermine Lear and he has no power left to stop them. It certainly begs the question, did Lear not know his daughters at all. Did his tragic flaw, his egotism, blind him to the fact he banished the one daughter who truly loved and cared for him, and left himself at the mercy of the cruel, power-hungry Goneril and Regan? So begins Lear's downfall. His decent into madness first begin to manifest its self in act 2, scene 4. Lear wants to see Regan and Cornwall but they are refusing, claiming to be ill and tired from traveling. Within an 18-line speech, Lear goes from angry: 'Are they "informed" of this? My breath and blood! "Fiery"? The "fiery" duke? Tell the hot duke that Lear-' We can imagine the tone the actor would use when playing this scene, the use of quotation marks and exclamation marks suggest he's scornful, and incredulous at being disobeyed. ...read more.

are particularly apt here. Lear sees his mistakes and what they have led too and we begin to feel that given the chance he could have become a better person. This, however is not to be, in a final nod to the definition of a 'tragic hero' Lear dies. The final act also sees the demise of Cordelia, Gloucester, Goneril, Regan and Edmund. With both good and bad characters dead it is difficult to say that justice has been done, however with all main antagonists out of the picture society, at least, can return to normal. Did Shakespeare set out with Aristotle's blue print in mind when he created Lear? We will never know but in my opinion he does seem to fit the main characteristics Aristotle outlined. The only argument against this I can see is the fact the audience does not witness Lear's great, admirable qualities before we are introduced to his 'tragic flaw'. If we look at our first introduction to Macbeth, one of Shakespeare's other 'tragic hero's' for example; The audience is told of how he fought bravely for his country and we see him promoted to Thane of Cawdor before we learn about his 'tragic flaw'. Despite this however I believe King Lear is one of the all time great tragedies and Lear himself most definitely deserves the title 'tragic hero'. ...read more.