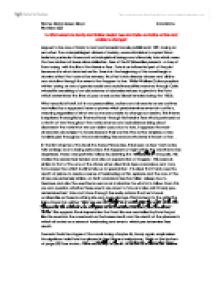 To What extent do Hardy and Walker depict Tess and Celie as victims of fate and unable to change?

To What extent do Hardy and Walker depict Tess and Celie as victims of fate and unable to change? Argued to be one of Hardy's most controversial novels, published in 1891 during an era when the underprivileged classes of society, were submissive to superstitious beliefs in particular those such as luck spiritual beings and ultimately fate which were the foundations of lower class civilisation, Tess of the D'Urbervilles presents a story of Fate toying with the life of the Heroine Tess. Fate is an influential part of the plot because it is what dictates her life. Events in the beginning of the novel begin a domino effect that cannot be reverse, thus Her fate is already chosen and all she can do is live through the events that happen to her. Whilst Walkers Colour purple is written during an era of gender social and racial inequalities narrated through Celie whose life consisting of an abundance of obstacles refuses to give into the Fate which determined the lives of poor uneducated black females during the 1930s. What exactly is Fate?, is it in our personalities, actions and character or are our lives controlled by a supposed force or power which predetermines events in our life's, meaning regardless of what we do we are unable to change our destiny. This theme is explored thoroughly by Thomas Hardy through his heroine Tess who is portrayed as a victim of fate throughout the novel, chance and coincidence bring ...read more.

This shows that Alice Walker purposely portrayed Celie's life as a victim of Fate, but gives her character an opportunity to resist this fate which results in a positive outcome for Celie. Its possible to say that Walker highlights the fact that although we may be victims of Fate we are able to control this Fate and our, she does this by showing that Celie is in fact not a victim of fate and unlike Tess her own actions are what allow her to change her destiny. We can say this because Celie confides in God through her letters, giving her hope and belief and she restrains herself from killing the man who has brought her pain and suffering, Mr..., unlike Tess . Celies ability to change and prevent Fate from controlling her life is ultimately down to the letters she writes to God, she tells her sister Nettie..."long as I can spell G-o-d I got somebody along" She believes she is never alone or hopeless as long as she has God in her life, writing to God gives her hope, this hope is what helps her overcome the negative aspects of her Fatalistic path that seemed as though her life would be controlled by abusive males that would drive her to murder her husband just like Tess did. On the other hand Tess' Fate is once again predetermined by Hardy in chapter 41 when she stumbles upon dying pheasents and puts them out of their misery by bringing their inevitable deaths to an end prematurely... ...read more.

Walker presents Celie as a victim of Fate like Hardy does Tess, however Walker stresses the point that we are able to change our Fate and destiny, this is significant as the colour purple which is the colour of the purple flowers represent spirituality & hope. She is almost trying to convey the message that, Fate can be overcome as long as hope is present, where as Hardy purposely doesn't give Tess any chance of overcoming her Fate, he deliberately does this to assert his negative view on religion, Walker gives her character hope through God, this is what enables Celie to overcome her so called 'Fate' or 'Destiny' whilst Hardy's pessimistic belief of religion deters him from doing this. Through his novels Hardy repeatedly articulated that chance and coincidence that bring about disaster are ultimately Fate, thus he empowers his belief through Tess that characters are subject to forces beyond their control. This is similar to another of his novels, 'The Return of the Native.' Throughout The Return of the Native bad things happen to good people, this is a depiction of his atheist perception that God does not exist and if there is a God it is lacking in morals, because good people, such as Tess are the victims of bad events and tragedy in life due to Fate. Like Hardy himself said...'Once a victim, always a victim of fate.' Word Count: 1,772 ?? ?? ?? ?? Name: Abdul-Azeez Alaya Candidate Number: 6001 ...read more.