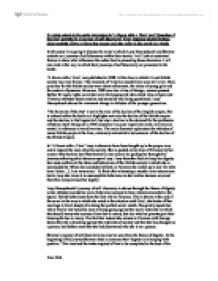 To what extent do the main characters in a Room with a View and Remains of the Day partake in a journey of self discovery? Your response should include close analysis of two or three key scenes and also refer to the novel as

To what extent do the main characters in 'a Room with a View' and 'Remains of the Day' partake in a journey of self discovery? Your response should include close analysis of two or three key scenes and also refer to the novel as a whole In this essay I am going to discuss the ways in which Lucy Honeychurch and Stevens embark on a journey of self discovery within their stories. I will look at contextual factors to show what influences the author had in presenting these characters. I will also look at the way in which their journeys of self discovery are presented in the books. 'A Room with a View' was published in 1908. At the time in which it is set British society was very formal. The remnants of Victorian sensibilities were still alive. Main priorities for the British society were about refinement, the virtue of young girls and the control of passions. However, 1908 was also a time of change, women pressed further for equal rights, socialists were challenging old ideas about class religion and Victorian attitudes about emotion and sexuality wee being questioned. Lucy Honeychurch shows the imminent change in attitudes of the younger generation. ...read more.

aback but at the end of the novel when Stevens declares after bantering with a complete stranger that 'bantering is hardly an unreasonable duty.' This shows that Stevens has discovered himself as the idea of bantering previously with lord Darlington seemed out of the question, but Stevens seems more relaxed under his new employment and even accepts the fact that his skills aren't at the standards they used to be 'more and more errors are appearing in my work.' It seems at this point that perhaps Stevens has understood the decline in the profession of butlers and accepts it. Another way in which both characters show their journey of self discovery is through the theme of love. Lucy despite meeting George in Florence and ending up kissing him accepts the marriage proposal from Cecil when she returns home. The scene in which George kisses Lucy shows the spontaneity of Lucy and how she does feel restricted by the boundaries enforced on her by society because her nature is to be spontaneous. However the way in which she handles the situation shows that although she disagrees with society's constraints she will still abide by them which is shown when she insists on "silence" from George, making insinuations against his character that he will tell others about their kiss. ...read more.

However at the end of both books, both characters seem to have acquired the ability to express themselves, Lucy when breaking off the divorce to Cecil on the grounds that his constant sheltering of her and attempts to define how she should think are conventional and insulting and Stevens when telling a stranger that 'I gave it all to lord Darlington.' This shows that the experiences they have endured in the book have taught them that to express themselves vocally and emotionally is not necessarily a bad thing. In 'A Room with a View' Lucy grows into a woman by choosing to follow her own instincts when it came to love and ignoring the boundaries imposed by her on British society. She learnt to express her own opinions in a beneficial way as opposed to reiterating the opinions of her peers and her elders. Stevens progressed as he to accepted love, despite the fact that his chance had passed. Also the fact that Stevens almost accepts the decline of his profession shows that he has really discovered himself. The end chapter of 'The Remains of the Day' epitomises Stevens' journey of self discovery as Stevens is presented as a extremely reserved character, at the end of the novel Stevens discuses his feeling to a complete stranger. Alex Fish ...read more.