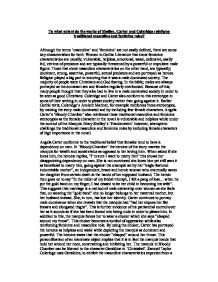 To what extent do the works of Shelley, Carter and Coleridge reinforce traditional masculine and feminine roles?

To what extent do the works of Shelley, Carter and Coleridge reinforce traditional masculine and feminine roles? Although the terms 'masculine' and 'feminine' are not easily defined, there are some key characteristics for both. Women in Gothic Literature that show feminine characteristics are usually; vulnerable, helpless, emotional, weak, defensive, easily led, victims of predators and are typically threatened by a powerful or impulsive male figure. Those that show masculine characteristics on the other hand, are typically; dominant, strong, assertive, powerful, s****l predators and are portrayed as heroes. Religion played a big part in ensuring that it was a male dominated society. The majority of people were Christians and God fearing. In the bible; males are always portrayed as the dominant s*x and females regularly overlooked. Because of this, many people thought that they also had to live in a male dominated society in order to be seen as good Christians. Coleridge and Carter also conform to this stereotype in some of their writing in order to please society rather than going against it. Earlier Gothic texts; Coleridge's Ancient Mariner, for example reinforces these stereotypes, by making the story male dominated and by including few female characters. Angela Carter's 'b****y Chamber' also reinforces these traditional masculine and feminine stereotypes as the female character in the novel is vulnerable and helpless while under the control of the Marquis. Mary Shelley's 'Frankenstein' however, attempts to challenge the traditional masculine and feminine roles by including female characters of high importance in the novel. Angela Carter conforms to the traditional belief that females tend to have a dependency on men. In 'b****y Chamber' the heroine of the story marries the marquis for wealth and social status as opposed to her loving him. When asked if she loves him, the heroine replies, "I'm sure I want to marry him" this shows her disappointing dependency on men. She is not convinced she loves him yet still sees it as beneficial to marry him, going against the example set by her ...read more.

Hence, she leaves the rose-representing her v****a and the desire she longs to experience-for the soldier. She laments, "And I leave you as a souvenir the dark, fanged rose I plucked from between my thighs, like a flower laid on a grave. On a grave" Carter invokes the idea of 'v****a dentata' by describing the rose's thorns as fangs. Just as she was able to kill but not kiss with her mouth, the Countess was unable to experience pleasure from her "thorned" v****a. Jeff Vandermeer, a b****y Chamber critic, says "her characters are forever escaping, socially, mentally, or physically, the traps laid by men. If she deals with established stereotypes in The b****y Chamber rather than fully-fleshed out characters, then this is because fairy tales clothe themselves in stereotypes and archetypes." The countess can be considered as one of these characters as she attempts to escape her physical/s****l trap. However, her lack of sexuality is not caused by a man but rather resolved by him. The rose is dead like the Countess and her chance to experience love and s****l fulfilment. By doing this, Carter has deprived the countess of her feminine characteristics and qualities. The countess' eventual death suggests that she could be seen as a stereotypically gothic feminine because even though she is beautiful, it is a man that has determined her faith. By doing this, Carter has conformed to traditional masculine and feminine roles as the countess' inner female is rescued by a male. While the She is a powerful woman herself, she still required the help from a male in order to be set free In addition, thousands of roses bloom above places in the ground where the Countess's victims are buried. They are not only numerous but illogically decadent, beautiful, and fragrant, echoing the Countess's physical perfection. Being symbols of femininity and s*x, they mock the Countess's sexless existence within the mansion that is her prison. ...read more.

As Geraldine is able to grasp more and more power away from the baron, the roles become harder to define. He starts to lose his control, and with it his confidence. This is why it seems as though the lines defining the Self and the Other have crossed. It is hard to determine which character fits which role. Is Sir Leoline still the self simply because he is male, or is he defined as the Other because he has lost his power? Likewise, is Geraldine the Other because she is female or does her description change because she has obtained power? These questions do not seem to have a concrete answer from the text alone. In conclusion; while Carter, Shelley and Coleridge do not necessarily reinforce the traditional feminine and masculine roles, they conform to them in their works. In Frankenstein, there is a close link between men and women in the novel. If we break it, the novel will lose its meaning. The characters of Mrs. Margaret Saville, Elizabeth Lavenza, Justine Moritz, and the characters of Robert Walton, Victor Frankenstein, and the fiend supplement each other. If we take one of them away, Frankenstein's plot will be different. Shelley uses the same methods to create the male and female characters, and makes women even more positive, selfless, and purer, than men. The presence of women adds romanticism to the novel, without which Frankenstein loses its spirit. Mrs. Margaret Saville, Elizabeth Lavenza, and Justin Moritz act independently, and in the most difficult moments of their lives they encourage the men, and take care of them forgetting about themselves. So, both the female and the male characters in Frankenstein are important, and we cannot manage without them. In b****y chamber, Carter conforms to the traditional feminine and masculine stereotypes with the character of the heroine and the Marquis, whilst also going against these stereotypes through the character of the mother, the hero of the story. Similarly, Coleridge also conforms to these stereotypes through the characters of Christabel and the Baron, whilst going against the stereotypes by using the omnipotent character of Geraldine. ...read more.