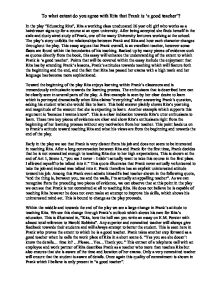 To what extent do you agree with Rita that Frank is 'a good teacher'? In the play "Educating Rita", Rita a working class uneducated 26 year old girl who works as a hairdresser signs up for a course at an open university. After being accepted she finds herself in the stale and dusty aired study of Frank, one of the many University lecturers working at the school. The play's story unfolds the relationships between Frank and Rita and how each character changes throughout the play. This essay argues that Frank overall, is an excellent teacher, however some flaws are found within the boundaries of his teaching. Backed up by many pieces of evidence such as quotes directly from the book, this essay will enhance the understanding of the extent to which Frank is 'a good teacher'. Points that will be covered within the essay include the enjoyment that Rita has by attending Frank's lessons, Frank's attitudes towards teaching which will feature both the beginning and the end, and the fact that Rita has passed her exams with a high mark and her language has become more sophisticated. ...read more.

As we can recognize from the preceding two pieces of evidence, we can observe that at this point in the play we can see that Frank is not committed at all to teaching Rita. He does not believe he is capable of teaching Rita however he does not even make an attempt to improve his skills, which shows his uninterested mind-set. This is bound to change as the play proceeds. Within the middle and towards the end of the play we see a large change in Frank's attitude to teaching Rita. We see this change through Frank's outlook which shows his care for Rita's education. This is illustrated in, "Rita, how the h**l can you write an essay on E.M. Forster with almost total reference to Harold Robbins". Any superior and committed teacher will always give feedback towards their students and will always attempt to better the student. This is seen here in Frank who proves the extent to which he is a good teacher. Frank takes another step forward as a good teacher when he calls the work place of Rita in a short scene 6. ...read more.

Many points suggest that Frank is 'a good teacher'. We can tell this through the enjoyment that Rita has during classes with Frank which is important as a student have some level of enjoyment to able to learn efficiently. Frank has clearly done this well. A teacher's effort and attitude plays a large part in the success of 'a good teacher'. Frank, in the early stages of the play does not show a healthy attitude and if he would have continued in this way Rita would not have done as well as she had. Frank seemed lazy and unprepared to put effort into his job and didn't seem to care. Providentially Frank's attitude changed quickly within the course of the play. We see changes such as incisive correcting of Rita's work indicating the care that is put in. Furthermore we see that Frank takes the initiative to call Rita for details on the exam. All these examples are lucid qualities of a good teacher and Frank falls perfectly among this margin. For further proof of his abilities of a good teacher, Rita was able to pass her exams with high marks, and has also become much more proficient in her language using more sophisticated and appealing words. ?? ?? ?? ?? ...read more.