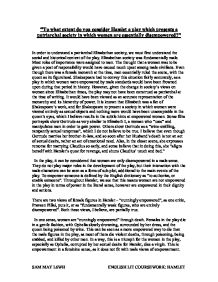 &quot;To what extent do you consider Hamlet a play which presents a patriarchal society in which women are essentially disempowered?&quot;

"To what extent do you consider Hamlet a play which presents a patriarchal society in which women are essentially disempowered?" In order to understand a patriarchal Elizabethan society, we must first understand the social and historical context of the play. Elizabethan society was fundamentally male. Most roles of importance were assigned to men. The thought that a woman was to be given a post of responsibility would have caused much upset among male civilians. Even though there was a female monarch at the time, men essentially ruled the scene, with the queen as its figurehead. Shakespeare had to convey this situation fairly accurately, as a play in which women were empowered by male standards would have been frowned upon during that period in history. However, given the change in society's views on women since Elizabethan times, the play may not have been construed as patriarchal at the time of writing. It would have been viewed as an accurate representation of the monarchy and its hierarchy of power. It is known that Elizabeth was a fan of Shakespeare's work, and for Shakespeare to present a society in which women were viewed entirely as s****l objects and nothing more would have been unacceptable in the queen's eyes, which I believe results in the subtle hints at empowered women. ...read more.

In this way, Ophelia is empowered Gertrude appears in the play as a woman whose actions contribute greatly to the negative turns in the plot - as Claudius puts it, Gertrude is both "My virtue or my plague". She is shown as having poor judgement, as seen in Act 1 Scene 2, in which we realise she must be more sensitive to her son's feelings. However, Gertrude's own insensitive actions reveal a form of male disempowerment in the play - Jealousy. Hamlet's jealousy of his mother during the grieving period may be for two reasons - one, that as her son, Hamlet should be given more attention than Claudius, and two - the fact that his mother has just married his uncle - "O, most wicked speed, to post, With such dexterity to incestuous sheets!". During the scene in the royal bedroom, a symbol of sexuality in itself, one of Gertrude's main weaknesses shows. She has the opportunity here to face the issue head on and resolve it, however she is the type of person to put bad news to the back of their minds and pretend like nothing has happened. She gives no deep thought to the matter at all. ...read more.

Even though she is about to die, she still manages to show a final act of compassion for her son, and effectively renounces Claudius from her heart, giving Hamlet a final triumph, and easing his madness. In conclusion, I think the evidence shows that there are different types of empowerment and disempowerment, male and female scattered throughout the play, some blatantly obvious, some rather more subtle. After careful analysis of the play, I have come to my own personal opinion that women in Hamlet are essentially disempowered, for these main reasons : Firstly, there are more men than women in the play, showing that women play less important roles. Secondly, women are not involved in the real important parts of the plot, they only act as a sub-plot, a tangent from the storyline. Also, by the end of the play, neither of the women are seen to have any sort of peace of mind, and they both die tragically. Sources Used: Shakespeare's Ophelia - Amanda Mabillard Gertrude In Hamlet - Orah Rosenblatt A - Z of Shakespeare - Charles Boyce Shakespeare's Life And Times - Oscar J Campbell Hamlet Commentary - Granville - Barker Hamlet Psychoanalysed. 1815words.W/Quotes 1703words W/out Quotes . SAM MAY L6WH ENGLISH LIT COURSEWORK: HAMLET ...read more.