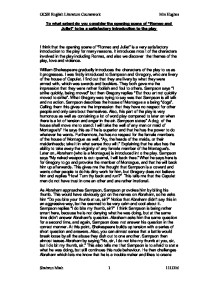 To what extent do you consider the opening scene of &quot;Romeo and Juliet&quot; to be a satisfactory introduction to the play

To what extent do you consider the opening scene of "Romeo and Juliet" to be a satisfactory introduction to the play I think that the opening scene of "Romeo and Juliet" is a very satisfactory introduction to the play for many reasons. It introduces most of the characters involved in the play including Romeo, and also we discover the themes of the play, love and violence. William Shakespeare gradually introduces the characters of the play to us as it progresses. I was firstly introduced to Sampson and Gregory, who are livery of the house of Capulet. I find out that they are livery by what they were armed with, which was swords and bucklers. They both gave me the impression that they were rather foolish and foul to others. Sampson says "I strike quickly, being moved" but then Gregory replies "But thou art not quickly moved to strike". What Gregory was trying to say was that Sampson is all talk and no action. Sampson describes the house of Montague as being "dogs". Calling them this gives me the impression that they have no respect for other people and only care bout themselves. Also, this part of the play is very humorous as well as containing a lot of word play compared to later on when there is a lot of tension and anger in the air. ...read more.

"Give my long sword, ho!" This gives me the impression that they are as bad as their servants and also encourage fighting, where as Lady Capulet does not want her husband to go join the battle field and says "A crutch, a crutch! Why call you for a sword" A crutch is given to fairly old people who have trouble and doing a certain activity, and for Lady Capulet to say this to her husband tells me that she thinks of her husband as and elderly man. What's more, Lord Montague and Lady Montague are just as bad as the Capulets; he also encourages the fighting, just like Lord Capulet which lets me know that they are just as bad as one another. The Prince is introduced to me during the fighting. The Prince is like the leader of Verona and the one who makes the decisions for the city. He makes a huge impact with his presence and also delivers an imposing speech. "What, ho! You men, you beasts," Instead of calling them human beings and people, he describes the people involved in the fighting as animals, and their action as being animal related. This suggests that the scenery was so horrific and vicious that it seemed as if animals had created the chaos. "With purple fountains issuing from your veins" I really like this comment made by the prince because purple is the colour of royalty and pure. ...read more.

Also, this part of the play is very relaxed, compared to the beginning. There is also a lot of word play at this stage as well "Not having that, which, having, make them short." says Romeo. There is also a short series of short sentences at this point as well "In love?" "Out---""Of love?" This also gives me a slight feeling that Benvolio is trying to put himself into Romeo's position to work out his crisis. Benvolio eventually figures out Romeo's problem by what he says, and realises its love. Benvolio then says "Should, without eyes, see pathways to his will" He says this trying to tell Romeo that it is not the end of the world and that there's plenty more fish in the sea, but again Romeo acts very rude and replies "Where shall we dine?" This gives me the impression that Romeo is a very bad-mannered person and just ignores any advice given to him by anyone. I also really admire Benvolio for trying to help Romeo, because if Romeo acted like this to me, then I would just leave him. By saying this, Romeo does however change his way of speaking later on in the play. When he meets Juliet, he speaks very maturely and romantically "Thus from my lips, by thine, my sin is purged" compared to "Where shall we dine? O me! What fray was here?" This is more aggressive-like and impolte. ?? ?? ?? ?? GCSE English Literature Coursework Mrs Hughes Shahzun Miah 1 11LDM ...read more.