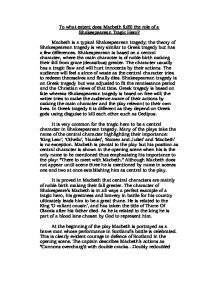 At the beginning of the play Macbeth is portrayed as a brave man whose performance in Scotland's battle is celebrated. This is clearly evident courage in defence of Scotland in the opening scene. The captain describes Macbeth's actions as "Cannons overcharg'd with double cracks...Doubly redoubled stokes upon the foe", with such positive feedback Duncan cannot help but be joyous towards Macbeth. It is common to a Shakespearean tragedy for the hero to have a tragic flaw, for example: * King Lear was driven by pride * Hamlet by revenge * Julius Caesar by greed * Othello by jealously And Macbeth is no difference, he is driven by ambition. Macbeth is loyal to the king and proves this by winning the battle for Duncan and his country, however Macbeth's ambition to become King is too strong and his morals start to slip and every word spoken from the witches his morals become non-existent. On returning from the battle Macbeth and Banquo encounter three witches who tell them of their future, Macbeth is told "hail Macbeth...Thane of Glamis...hail Macbeth...Thane of Cawdor...hail Macbeth...King thereafter." ...read more.

The central character is mainly of noble birth, like Macbeth is Thane of Glamis, making the fall from grace (decasibus) greater. Ambition is the flaw that makes Macbeth fall as well as his wife's thoughts about becoming King. Even when Macbeth hears that Malcolm will be the success to the throne his moral decision is clouded by his ambition " The prince of Cumberland: that is a step-On which I must fall down, or else o'erleap, for in my way it lies." Wanting to become King and believing the witches, he will not let anything get in the way of his future. Once Macbeth arrives home his plans change once again, knowing her husband is known for going back on his decision, Lady Macbeth decides to be the push he needs to go through with his plan of killing Duncan. Deciding to kill Duncan is the start of Macbeth's decasibus as he is hurting innocents in the process to satisfy his ambition. After Duncan is killed Macbeth feels a sense of waste in himself and guilt as he releases what he has done. As Macbeth murders more and more people he hurts ...read more.