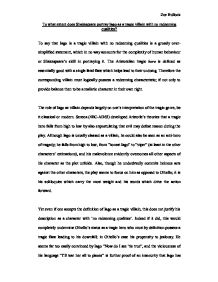 To what extent does Shakespeare present Iago as a tragic villain with no redeeming features?

To what extent does Shakespeare portray Iago as a tragic villain with no redeeming qualities? To say that Iago is a tragic villain with no redeeming qualities is a grossly over-simplified statement, which in no way accounts for the complexity of human behaviour or Shakespeare's skill in portraying it. The Aristotelian tragic hero is defined as essentially good with a single fatal flaw which helps lead to their undoing. Therefore the corresponding villain must logically possess a redeeming characteristic; if not only to provide balance then to be a realistic character in their own right. The role of Iago as villain depends largely on one's interpretation of the tragic genre, be it classical or modern. Seneca (4BC-AD65) developed Aristotle's theories that a tragic hero falls from high to low by also expostulating that evil may defeat reason during the play. Although Iago is usually classed as a villain, he could also be seen as an anti-hero of tragedy; he falls from high to low, from "honest Iago" to "viper" (at least in the other characters' estimations), and his malevolence evidently overcomes all other aspects of his character as the plot unfolds. ...read more.

It is clear then that the humanisation of Iago must rest on the presence of motives for his machinations. Certainly, multiple reasons are hinted at in his speeches. He is definitely jealous of Cassio's promotion; shown by "mere prattle...is all his soldiership", the word "prattle" especially conveying his contempt of Cassio's opinion. He could also be misogynistically attempting to "turn (Desdemona's) virtue into pitch", or his racism ("old black ram") might fuel his destruction of Othello. Perhaps most importantly, he suspects that Othello has slept with his wife ("twixt my sheets/He's done my office"). The latter is a clear motive for revenge, although some have argued that even this seems almost an afterthought as opposed to a driving force. It is only mentioned briefly in the entire play, and even then in a calm, factual manner - the quote "done my office" seems especially banal, as if Othello has merely performed a job designated to Iago - hardly evidence that he is consumed with jealousy in his plotting. However these are still motives and one must remember that in Shakespeare's time they may have appeared much more significant than today. ...read more.

Of course, it cannot be avoided that Iago is still a villain. He is cunning, ruthless and nothing can excuse the fact that his words - if not his actions - lead to the deaths of Desdemona and Othello. Yet he is also tragic, not because of an absence of redeeming qualities, but because one cannot see them. Iago is unfathomable - we fear him because we cannot understand him. As one critic said, "(Iago) is monstrous because, faced with the manifold richness of experience, his only reaction is calculation and the desire to manipulate"3. Yet Iago's tragedy arises not from his manipulations, but from his inability to appreciate the "manifold richness" before him. Every other character experiences conclusion; even Othello, by killing himself, achieves a semblance of closure for his actions, and a catharsis for the audience. The only exception is Iago, who retains a frustratingly ambiguous ending. He is not killed, yet neither does he show remorse, nor indeed any change of character. Instead he merely remains, silent and impenetrable, seemingly unconcerned about his own fate. That is Iago's tragedy; not that he is irredeemable, but that one is never allowed close enough to him to prove otherwise. ...read more.