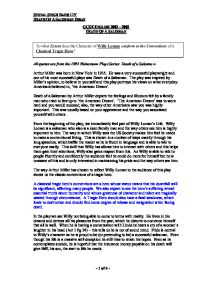 To what Extent does the Character of w***y Loman conform to the Conventions of a Classical Tragic Hero?

GCSE ENGLISH 2002 - 2003 DEATH OF A SALESMAN All quotes are from the 1994 Heinemann Plays Series: Death of a Salesman Arthur Miller was born in New York in 1915. He was a very successful playwright and one of his most successful plays was Death of a Salesman. The play was inspired by Miller's opinion, to believe in yourself and this play portrays his views on what everyday- Americans believed in, 'the American Dream'. Death of a Salesman by Arthur Miller depicts the feelings and illusions felt by a family man who tried to live up to 'the American Dream'. 'The American Dream' was to work hard and you would succeed; also, the way other Americans saw you was highly important. This was usually based on your appearance and the way you associated yourself with others. From the beginning of the play, we immediately feel part of w***y Loman's Life. w***y Loman is a salesman who also is a keen family man and the way others see him is highly important to him. The way in which w***y sees the US Society makes him feel he needs to make a conventional living. This is shown in a number of ways mainly through his long speeches, which baffle the reader as he is fluent in language and is able to talk to everyone easily. ...read more.

Initially, this would be the case but at the end of the play at w***y's funeral his wife Linda asks, "Why didn't anyone come?" (Requiem Pg 106) and she cannot see why nobody came because to her he portrayed himself to be a man who had admirable qualities and a tremendous influence over his family; "But where are all the people he knew? ..." (Requiem Pg 106). This is saddening as we, the audience, see Linda learning why there was not a significant amount of people there. w***y Loman was a salesman and through reading the play we see that he was very fluent in communicating with others. However, we are able to see that the people to whom he spoke to showed respect to him out of courtesy but did not particularly take an interest in what he really had to say. Throughout his life w***y's suffering reveals essential truths about humanity and this play helps demonstrate how people should portray themselves to others and to themselves - "I always felt that if a man was impressive, and well liked, that nothing else mattered" (Act 2 Pg 72), this quote shows w***y's belief regarding the way society saw him. Through w***y's life experiences and encounters we are able to see the way w***y thinks about life. From this we are unsure whether Arthur Miller is trying to portray w***y as a classical Tragic Hero or a Modern Hero - which is someone who performs actions and says things to please others. ...read more.

Through w***y's experiences essential truths are revealed through his suffering such as the way people behave and act to make them feel more superior about the image about themselves that they are portraying towards others. We are able to see from Death of a Salesman that the character w***y Loman had the attributes to conform to the tragic conventions of a typical Classical Tragic Hero. This is because within this play there was a death of a central character, which had admirable qualities and had as huge influence among others. w***y's downfall was significant as he managed to leave an enormous impression and portrayal to all of the people who he met and we are able to see that from his suffering he was able to tell is of essential truths about humanity and how people depict and generalise one another. From this play, Death of a Salesman by Arthur Miller, we learn that the way someone is seen by another is very important to that person in particular this is because it helps motivate self-esteem. The play also shows what the 'American Dream' is about, this is the way people see you through your actions or sayings. The message from this play is to behave in your normal manner and not to be intimidated by the way others perceive you. SUNPAL SINGH BAINS 11Y DEATH OF A SALESMAN ESSAY - 1 of 4 - ...read more.