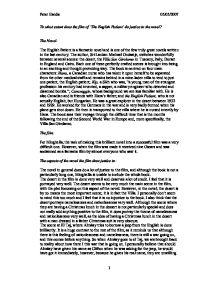 To what extent does the film of 'The English Patient' do justice to the novel?

To what extent does the film of 'The English Patient' do justice to the novel? The Novel: The English Patient is a fantastic novel and is one of the few truly great novels written in the last century. The author, Sri Lankan Michael Ondaatje, switches wonderfully between several scenes: the desert, the Villa San Girolamo in Tuscany, Italy, Dorset in England and Cairo. Each one of these perfectly crafted scenes is brought into being in an exciting and thought provoking way. The book is centred on four main characters: Hana, a Canadian nurse who has taken it upon herself to be separated from the other medical staff and remains behind in a mine-laden villa to tend to just one patient, the English patient; Kip, a Sikh who was, "a young man of the strangest profession his century had invented, a sapper, a military engineer who detected and disarmed bombs."; Caravaggio, whose background we are less familiar with. He is also Canadian and is friends with Hana's father; and the English Patient, who is not actually English, but Hungarian. He was a great explorer in the desert between 1932 and 1939. ...read more.

The scene at El Taj, where Alm�sy tries to borrow a jeep from the English is done brilliantly. It is a huge contrast to the rest of the film, as it reminds us that although there is this feeling of nationlessness and namelessness, there is still a war going on, and this comes before anything. So when Alm�sy goes to el Taj, we are brought back to reality about how there I this war that is going on. I personally believe that should Alm�sy have given his name as Clifton when he was asking for the jeep, he would have got it immediately, however, because he gives his real name, they are unwilling to give it to him, and eventually h ends up being taken away on suspicion of being mad. I personally feel that the relationship between Kip and Hana was not done very well. In the novel, there is a brilliant contrast between their gentle relationship and the course, rough relationship between Alm�sy and Katherine, but in the film, justice is not served on this part of the plot. There is, however, one part of this relationship that is done well, and that is the scene in the church with the pulley. ...read more.

Alm�sy is a middle aged Hungarian and Katherine is an upper class young English woman. In the film, the English patient dies eventually because of his injuries, he says that he doesn't want to live anymore and gives up his struggle for life. However, in the film, there is an aspect of euthanasia. He says that he doesn't want to live anymore, so he persuades Hana to give him an overdose of morphine, and it is this that kills him. Another thing that I didn't like was the idea of Alm�sy being shot down at the beginning which is why he ends up so badly burnt. However, in the novel he is not shot down, and I think there is no need to add this to the film. Conclusion: In my opinion, the negative points about this film, in comparison to the book far outweigh the positive points. Although the film itself received nine Oscars, I still feel that it does not o complete justice to the book. However, as a film, it was very good and I enjoyed watching it a lot, but, as a film set out to do justice to the novel, it did not do a wonderful job. Peter Hardie 05/05/2007 1 ...read more.