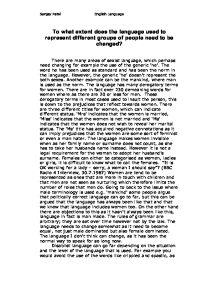 To what extent does the language used to represent different groups of people need to be changed?

To what extent does the language used to represent different groups of people need to be changed? There are many areas of s****t language, which perhaps need changing for example the use of the generic 'he'. The word he has been used as standard and has been the norm in the language. However, the generic 'he' doesn't represent the both sexes. Another example can be the mankind, where man is used as the norm. The language has many derogatory terms for women. There are in fact over 230 demeaning words for women where as there are 20 or less for men. These derogatory terms in most cases used to insult the person, this is down to the prejudices that reflect towards women. There are three different titles for women, which can indicate different status. 'Mrs' indicates that the women is married, 'Miss' indicates that the women is not married and 'Ms' indicates that the women does not wish to reveal her marital status. The 'Ms' title has acquired negative connotations as it can imply prejudices that the women are some sort of feminist or even a man hater. ...read more.

This statement can become untrue as the person wit the disability may only have a small deficiency like there are visually impaired. The word spastic is originally a medical term, but it has been changed into a school ground insult where it has evolved into 'Spaz'. The correct term that should be used is CP Sufferer as this is less insulting and there are no insults that are linked. Personally I think that the word disabled isn't that offensive and if some one was to say that it was I would disagree on the grounds that there are more insulting words in the language. An article called 'Cripple beaten to death at home' written by a tabloid newspaper was going to far with the use of its words in its headline. The use of the term cripple indicated that the victim was also disabled, powerless and then they got beaten up. The headline could have just wrote man or women beaten to death at home, I think that the newspaper was trying to target its audience by emphasising the fact that the person that got beaten to death was actually a cripple. ...read more.

The term then is referred to as a 'brother' ('Ma n***a') I think that the language can change all depending on how the individual is and how they have been brought up. Out of all the three areas of language covered I think that r****t language has to come 1st for most offensive as in most cases the language is then carried forward to a violent operation. Politically corrected language should be emphasised a lot as many of the non-politically correct words tend to be slang and or maybe r****t. However there are exceptions to this, for example the term 'black' can be used to differentiate between say 2 people, this term may or may not cause offence but it is better to use the politically correct term instead to be safe. The language needs to be changed in all three areas that represent the three different groups, but the priority of this change should be Disablist and r****t language as they are what cause the most offence and concern, s****t language isn't as important however the language could be fine tuned to accept both men and women into society a bit better. Sanjay Patel English Language ...read more.