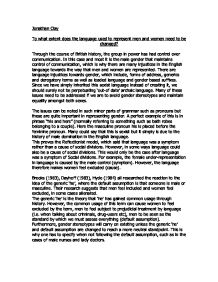 To what extent does the language used to represent men and women need to be changed?

Jonathan Clay To what extent does the language used to represent men and women need to be changed? Through the course of British history, the group in power has had control over communication. In this case and most it is the male gender that maintains control of communication, which is why there are many injustices in the English language towards the way that men and women are represented. There are language injustices towards gender, which include, forms of address, generics and derogatory terms as well as loaded language and gender based suffixes. Since we have simply inherited this sexist language instead of creating it, we should surely not be perpetuating 'out-of date' archaic language. Many of these issues need to be addressed if we are to avoid gender stereotypes and maintain equality amongst both sexes. The issues can be noted in such minor parts of grammar such as pronouns but these are quite important in representing gender. A perfect example of this is in phrase "his and hers" (normally referring to something such as bath robes belonging to a couple). Here the masculine pronoun his is placed before the feminine pronoun. Many could say that this is sexist but it simply is due to the history of male domination in the English language. ...read more.

Unfortunately, both seem humorous as the syllabacy (in the case of deliverywoman) or the usage (in the case of camerawoman) seems unusual and slightly ridiculous. People have become so familiar with the use of '-man' on the end of many words that it is pronounced as m(a)n instead of m(ae)n. Subsequently, some people believe that '-man' is a suffix and not a word because of the change in pronunciation. For many this is why '-woman' sounds inappropriate as '-man' has had a pronounced change to form a suffix whereas '-woman' is already said as wom(a)n so it will be harder for it to change in to a suffix. This seems to be why the feminine suffixes '-ess' and '-ette' as in actress and usherette. However, these sort of terms can seem derogatory and diminutive because they are following the generic 'he' and therefore have to create feminine term for such unisex occupations as actors, ushers and authors. Surely, the first male term should be kept and applied to both sexes. Some professions already have a universal name such as in the case of Doctors and writers although when describing a female in one of these professions, some may say lady doctors or women writers. There are also the odd occasions when 'man' is a prefix such as in mankind. ...read more.

In truth more words with positive connotations will begin to spring up which describe women as the weight of equality shifts to the middle. However, part of the reason that there are still so many words describing women's sexuality is because the media still include many derogatory terms relating to women's sexuality. The television, radio, newspapers, films and magazines still include the sexuality of women since it includes loaded language relating to sex that interests the public. On the other hand, newspapers should avoid infanticization by using derogatory terms like "sex kitten" when describing women. This seems to unjust since these types of terms would not be used on men since these terms fit the female stereotype. They are normally infanticizing diminutives, which also have sexual connotations. Furthermore, less words describing men as the dominant sex should be used and newspapers should avoid using words describing men's sexuality that are almost complimentary such as "a stud". English language does have many gender injustices, according to forms of address, affixes, pronouns and generic descriptions. These all have words that portray men in a more positive light than women. However, unlike most other romance languages, English is far more neutral in the fact that words do not have gender. This means words cannot be associated with a certain gender only their meaning can. Furthermore, most of the problems can be easily fixed as the language evolves. ...read more.