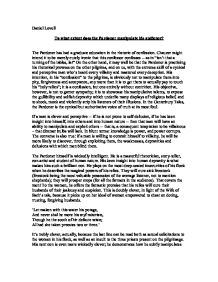 To what extent does the Pardoner manipulate his audience?

Daniel Lovell To what extent does the Pardoner manipulate his audience? The Pardoner has had a graduate education in the rhetoric of confession. Chaucer might intend it to be merely cutely ironic that this confessor confesses -- as in "isn't that a turning of the tables, la!" On the other hand, it may well be that the Pardoner is practicing his rhetorical prowess on the other pilgrims, and on us, with the extreme skill of a cynical and perceptive man who's heard every villainy and mastered every deception. His intention, in his "confession" to the pilgrims, is obviously not to manipulate them into pity, forgiveness and acceptance, any more than it is to get them to actually pay to touch his "holy relics"; it is a confession, but one entirely without contrition. His objective, however, is not to garner sympathy; it is to showcase his manipulative talents, to expose the gullibility and selfish depravity which underlie many displays of religious belief, and to shock, mock and violently strip his listeners of their illusions. ...read more.

'Let maken with this water his potage, And never shal he more his wyf mistriste, Though he the sooth of hir defaute wiste; Al had she taken preestes two or three.' It's trebly clever, actually, because the last line can be read both as s****l solicitations to the women in his flock, as well as an insult to the three priests present on the pilgrimage. His next con is even more wickedly clever; he demonstrates how he subtly manipulates his flock into coming forward and making offerings to his relics in order to avoid suspicion that they have committed some horrible sin. 'If any wight be in this chirche now, That hath doon sinne horrible, that he Dar nat, for shame, of it y-shirven be, Or any womman, be she yong or old, That hath y-maad hir housbond cokewold, Swich folk shul have no power ne no grace To offren to my reliks in this place.' ...read more.

The objective of his sermons is to make his audience believe that they will die for their cupidity; does he believe that the moral of his tale applies to him in the same way that it applies to the three young rioters? The Pardoner may or may not believe it. If he does, he clearly doesn't care: after his tale is over, he proceeds to the height of audacious mockery -- of himself and of the pilgrims -- by hocking his relics to the pilgrims to whom he has just revealed the entire cynical fraud. But does Chaucer believe that the moral of the tale applies to the Pardoner? He must. As critical as he was of ecclesiastical abuse, Chaucer was, nevertheless, Christian. As impressive and complex as it is, even the Pardoner's self-awareness has its limits. If the relationship between the teller and his tale is consistent with the other tellers and their tales, we can assume that Chaucer is suggesting that the Pardoner quite definitely has a blind spot: the wages of his sin will be his own death, and his lack of contrition indicates that he does not perceive this. ...read more.

This essay is impressive for its thoughtfulness and engagement with the topic. It could be further improved by more textual detail, and by giving thought to technique as well as content - how does the pardoner manipulate rhetorical language to achieve his
aims?
****