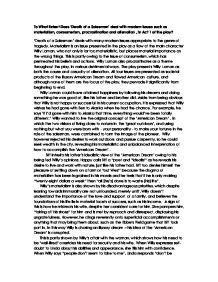 To What Extent Does Death of a Salesman deal with modern issues such as materialism, consumerism, procrastination and alienation, in Act 1 of the play?

To What Extent Does 'Death of a Salesman' deal with modern issues such as materialism, consumerism, procrastination and alienation, in Act 1 of the play? 'Death of a Salesman' deals with many modern issues appropriate to the genre of tragedy. Materialism is an issue presented in the play as a flaw of the main character w***y Loman, who not only is far too materialistic, but places material importance on the wrong things. This is partly owing to the issue of consumerism, which has permeated his beliefs and actions. w***y Loman also procrastinates as a theme throughout the play, in various detrimental ways. The play presents w***y Loman as both the cause and casualty of alienation. All four issues are presented as societal products of the illusory American Dream and flawed American culture, and although none of them are the focus of the play, they pervade it significantly from beginning to end. w***y Loman could have attained happiness by following his dreams and doing something he was good at, like his father and brother did. Aside from being obvious that w***y is not happy or successful in his current occupation, it is expressed that w***y wishes he had gone with Ben to Alaska when he had the chance. ...read more.

The play tackles the issue of consumerism in its treatment of the 'American Dream' and the sadness it expresses in its degeneration. Through w***y Loman, Miller complains how America has taken the 'American Dream' too far and fallen victim to consumerism, losing the original values and ethics of the ideal in translation. The 'American Dream' was the aim to achieve wealth and status by only hard work and faith - the aim of a society in which everyone had the same starting line in the race to success. Miller points out the stark reality that success actually relies on solid results, a reality which Charley and his son understand and consequently, flourish. Bernard concentrates his energies on studying as he knows this is what will help him make an impact in the business world, unlike Biff and Happy who have been taught by w***y that how they are "well-liked" and "built like Adonises" will see them through. w***y Loman fails to realise that times have changed since the days when the frontiersmen - salesman - sold their personalities, not their goods, and made their living on the basis of their personal charisma. Confirming this, Charley tells w***y that "The only thing you got in this world is what you can sell. ...read more.

He turns to the fantasy of his dead brother Ben for advice, further portraying his growing alienation from reality. The play shows w***y's alienation to be a result of the American Capitalist system having turned its back on him and also his own personal flaws. w***y's alienation spreads to his two sons, who have been instilled with their father's flawed moral values. w***y's chauvinistic attitude and lack of respect for his wife is evident in Happy, who uses women to the point that sleeping with them "gets like bowling" and "doesn't mean anything". He refers to women as "gorgeous creatures". w***y's condoning of Biff's petty thieving as a boy led to his implied kleptomania and eventual jail sentence as a grown man. The brothers are both alienated from society in their defective behaviour and the temporary nature of their livelihoods. Both boys are not content with their lives. Happy is referred to as a "philandering b*m" and Biff especially is "like a boy", unable to settle down and grasp some direction or security. Alienation is the issue perhaps dealt with the most as it is the end result of the other issues combined and the one which has the largest part in the death of the main character, however Miller's play treats the issues as living off each other and as all counting towards the tragic fate that is the conclusion of the events of the play. ...read more.