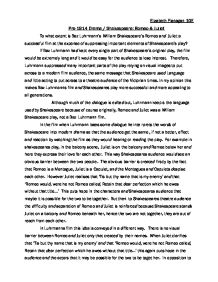 To what extent is Baz Luhrmann's William Shakespeare's Romeo and Juliet a successful film at the expense of suppressing important elements of Shakespeare's play?

Elizabeth Flanagan 10E Pre-1914 Drama / Shakespeare: Romeo & Juliet To what extent is Baz Luhrmann's William Shakespeare's Romeo and Juliet a successful film at the expense of suppressing important elements of Shakespeare's play? If Baz Luhrmann had kept every single part of Shakespeare's original play, the film would be extremely long and it would be easy for the audience to lose interest. Therefore, Luhrmann suppressed many important parts of the play relying on visual images to put across to a modern film audience, the same message that Shakespeare used Language and little acting to put across to a theatre audience of the Victorian times. In my opinion this makes Baz Luhrmanns film and Shakespeares play more successful and more appealing to all generations. Although much of the dialogue is edited out, Luhrmann keeps the language used by Shakespeare because of course originally, Romeo and Juliet was a William Shakespeare play, not a Baz Luhrmann film. In the film when Luhrmann loses some dialogue he interprets the words of Shakespeare into modern drama so that the audience get the same, if not a better, effect and reaction by watching the film as they would hearing or reading the play. For example in shakespeares play, in the balcony scene, Juliet is on the balcony and Romeo below her and here they express their love for each other. This way Shakespeares audience would see an obvious barrier between the two people. The obvious barrier is created firstly by the fact that Romeo is a Montague, Juliet is a Capulet, and the Montagues and Capulets despise each other. However Juliet realises that 'Tis but thy name that is my enemy' and that 'Romeo would, were he not Romeo called, Retain that dear perfection which he owes without that title...' This puts hope in the characters and Shakespeares audience that maybe it is possible for the two to be together. ...read more.

However, to keep switching storylines on stage would be difficult because as well as it being confusing for the audience, it might also be time-consuming getting actors on and off the stage. In the same way, I think that modern film audiences can react differently to a theatre audience, modern or Shakespearean. A film audience can become involved in the film because of the use of different camera angles or shots. Whereas, although a theatre audience might think that they can relate to the feelings of a character, they may not be able to relate too close because they are trying to connect with the words of a character, without seeing the look on their face. In addition, it is not just about the film and the theatre, but it is also to do with the audiences expectations. Somebody going to see the film would expect more than somebody going to the theatre would. The person going to the film would expect to see different locations, atmospheres, day and night; it would be more like reality to them. On the other hand, the person going to the theatre might be expecting good, strong voices/ dialogue, good language, and good acting. So here, before even watching or hearing the play, Romeo and Juliet, we already have two very different predictions/ideas of what each person expects from the play but portrayed differently. In the film and the play, especially in the death scene, dramatic irony is played upon a lot. For example, Romeo talks to Juliet, whom he thinks is dead, he kisses her and wonders why she is not pale, and why her cheeks and lips are still warm, thus ROMEO "Thou art not conquered, beauty's ensign yet Is crimson in thy lips and in thy cheeks, And deaths pale flag is not advanced there." The audience know that she is still alive and they want Romeo to see this. ...read more.

For instance in the death scene Juliet wakes up just as Romeo has taken the potion, making it very dramatic for the audience. On the other hand, Shakespeare waits until Romeo has actually died before Juliet wakes up. In addition, to make the film appeal to the modern film audience Luhrmann tends to speed up the narrative so as not to make it long-winded and boring. Because in Shakespeare's time a theatre audience would hear the play, people expected long dialogue. Relating to this, most people nowadays know the story of Romeo and Juliet and therefore Luhrmann can edit text/dialogue. Luhrmann is 'dumbing down' the play, making it something to see, consequently, he relies on music, action, and visual effects to keep the audiences attention. In contrast with this, in Shakespeare's day, there was no scenery, few props and therefore when people went to hear Shakespeare plays, it was more about the language, and something they could go home and think about. Following on from this, some of the language in Luhrmann's film, is not well spoken, the audience cannot hear it. However, this does not matter a lot because the audience can more-or-less follow the story without speech. On the other hand, when people went to hear the play, the language, speech, and diction had to be good because dialogue was the only way of telling the play, as there was nothing visual. A good example of when Luhrmann uses music, sound, and visual effects, is when Romeo has the ecstasy pill on his finger. At this time in the play, it would be silent and all about Romeo. However, Luhrmann has fireworks exploding behind Romeo, therefore creating a more spectacular scene, and making it more dramatic for the audience. Because Baz Luhrmann keeps the authentic text but updates the setting, he makes Shakespeare familiar to a whole new generation. I think this is a good thing because maybe if Luhrmann had not made the film, Shakespeare plays would not live on for as long as they will do because people might dislike it because of the difficult language. ...read more.