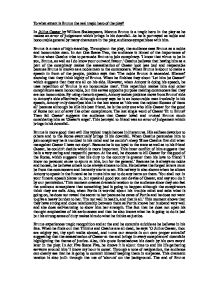 to what extent is brutus the real tragic hero of the play?

To what extent is Brutus the real tragic hero of the play? In Julius Caesar by William Shakespeare, Marcus Brutus is a tragic hero in the play as he makes an error of judgement which brings in his downfall. As he is portrayed as noble and honourable general by many characters in the play, audience sympathises with him. Brutus is a man of high standing. Throughout the play, the audience sees Brutus as a noble and honourable man. In Act One Scene Two, the audience is hinted of the importance of Brutus when Cassius tries to persuade Brutus to join conspiracy. 'I know that virtue to be in you, Brutus, as well as I do know your outward favour.' Cassius believes that having him as a part of the conspiracy makes the assassination of Caesar look less bad and respectable because Brutus is known as a noble man to the commoners. When Brutus is about to make a speech in front of the people, plebian says that 'The noble Brutus is ascended. Silence!' showing that they think highly of Brutus. ...read more.

When Cassius persuades him to join conspiracy he is troubled in his mind and he couldn't sleep 'Since Cassius first did whet me against Caesar I have not slept'. Because he is too loyal to the state as well as to his friend Caesar, he couldn't decide which is more important. This inner conflict of him suggests that he is a very caring and respectful person. At the end, he chooses to kill Caesar for the good of the Rome, which suggests that his duty to the country is greater than his love to friend 'I know no personal cause to spurn at him, but for the general.' Because he is always so noble and honest, he believes others to be always sincere to him. He believes the forged letters must be from the commoners and instantly starts to act. His naivety is also shown when he allows Antony to speak in the funeral as he trusts him not to do any harm on them. 'You shall not in your funeral speech blame us, but speak all good you can devise of Caesar, and say you do it by our permission.' ...read more.

suggesting that the assassination of Caesar at the end brings in every conspirators' downfalls highlighting the theme of justice. Also, this quote foreshadows his death by his own sword later in the play. In Act Five Scene Five, he knows it is about time to end his life gathering servants around him 'I know my hour is come'. Through a tone of resignation, the audience can clearly see that he is going to commit himself keeping them in suspense. This dramatic tension is also built through the use of 'alarum' on the background. The end of Brutus involves the audience's pity for him creating a tone of sympathy 'Farewell to you, and you'. This moment highlights the theme of 'Fate vs freewill' because Brutus accepts his fate which he has created through his life. After he dies, Strato says 'For Brutus only overcame himself and no man else hath honour by his death.' saying that only himself can choose his fate. Because his sense of duty to Rome and naivety lead to his wrong judgement and eventually to the death, Marcus Brutus is the real tragic hero in Julius Caesar. As a tragic hero, Brutus engages the audiences' sympathy to himself bringing out a sense of tragedy in the play. ...read more.