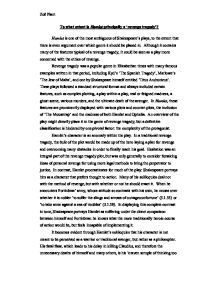 To what extent is 'Hamlet' principally a revenge tragedy?

To what extent is Hamlet principally a 'revenge tragedy'? Hamlet is one of the most ambiguous of Shakespeare's plays, to the extent that there is even argument over which genre it should be placed in. Although it contains many of the features typical of a revenge tragedy, it could be seen as a play more concerned with the ethics of revenge. Revenge tragedy was a popular genre in Elizabethan times with many famous examples written in that period, including Kyd's 'The Spanish Tragedy', Marlowe's 'The Jew of Malta', and one by Shakespeare himself entitled 'Titus Andronicus'. These plays followed a standard structural format and always included certain features, such as complex plotting, a play within a play, real or feigned madness, a ghost scene, various murders, and the ultimate death of the avenger. In Hamlet, these features are prominently displayed with various plots and counter-plots, the inclusion of 'The Mousetrap' and the madness of both Hamlet and Ophelia. An overview of the play might directly place it in the genre of revenge tragedy, but a definitive classification is hindered by one pivotal factor: the complexity of the protagonist. Hamlet's character is an anomaly within the play. In a traditional revenge tragedy, the bulk of the plot would be made up of the hero laying a plan for revenge and overcoming many obstacles in order to finally reach his goal. ...read more.

When Hamlet was written, England was in great upheaval, and in particular religious change, a period often referred to as the Renaissance. The Renaissance was the rebirth of old classical Greek and Roman culture into a more modern, Christian age, something which caused confusing and often conflicting beliefs; this is reflected in Shakespeare's depiction of Hamlet. The character is portrayed as both religious and moral, declaring from the start that he cannot commit suicide because the 'Everlasting had...fixed his canon 'gainst self-slaughter' (1.2.131), and calling on 'angels and ministers of grace' (1.4.39). Unfortunately, the demands made on the character of Hamlet are far from Christian, but appeal to a more Classical nature: that of the heroic bloodthirsty avenger, Achilles as opposed to Jesus. The Renaissance brought about the popularity of the revenge tragedy genre, as many of the values displayed in a typical play of this type, such as honour, were also prevalent in Greek and Roman culture. Christian beliefs on revenge were very different to Classical ones. Jesus taught the policy of 'turn the other cheek': Francis Bacon's essay on revenge upholds this principle, expressing that 'in taking revenge, a man is but even with his enemy; but in passing it over, he is superior', and even going further by claiming that 'vindictive persons live the lives of witches.' The character of the Ghost could be considered representative of the blend of cultures: he is 'confined to fast in fires' of Purgatory because he was ...read more.

Fortinbras, previously described as being 'of unimproved mettle, hot and full' (1.1.95) is said by Hamlet to have 'spirit with divine ambition puffed' (4.4.62). The language used in these descriptions is strident and powerful, reflecting the perceived character of Fortinbras as hot-headed and impulsive - much like descriptions of traditional revenge tragedy heroes, and very unlike Hamlet. Laertes too is portrayed as reminiscent of this. In direct contrast to Hamlet he forsakes his religion in pursuit of revenge, banishing 'conscience and grace to the profoundest pit' (4.5.151) and declaring, 'I dare damnation' (4.5.152). Although much religious language is used, it is only in relation to a new disregard for its teachings; Hamlet is shown to continually refer to his religion even whilst contemplating revenge. Laertes even goes so far as to say he would 'cut [Hamlet's] throat i'th' church' (4.7.124): this directly relates to Shakespeare's presentation of Hamlet - who shrank from doing just that - as a character mindful of religious teaching and consequence. Shakespeare provides a stereotypical view of the revenge tragedy hero as one who will 'greatly find quarrel in a straw when honour's at the stake' (4.4.54). This is a description that matches perfectly both Laertes and Fortinbras, and undoubtedly both of these characters have been inserted into Hamlet as a means of accentuating the unusual behaviour of the protagonist. The repetition of the word 'greatly' in Hamlet's soliloquy of Act 4 Scene 4 implies that there is an admiration for men such as these, who follow their bloodlust: less so for those such as Hamlet, who delay through ethical dilemmas. ...read more.