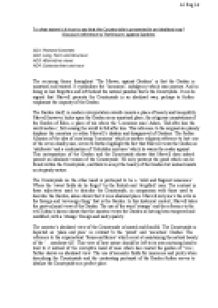 To what extent is it true to say that the Countryside is presented in an idealised way? Discuss in reference to &quot;The Mower&quot; compared to &quot;Gardens&quot;.

﻿A2 Eng Lit To what extent is it true to say that the Countryside is presented in an idealised way? Discuss in reference to The Mower, against Gardens AO1: Pastoral Concepts AO2: Lang, Form and Structure AO3: Alternative views AO4: Contexts-then and now The recurring theme throughout ?The Mower, against Gardens? is that the Garden is unnatural and tainted. It symbolises the ?luxurious?, indulgency which man pursues. And in doing so has forgotten and left behind the natural paradise that is the Countryside. It can be argued that Marvell presents the Countryside in an idealised way, perhaps to further emphasise the impurity of the Garden. ...read more.

The further Allusion of the idea of man being ?luxurious? which is another religious reference to l**t- one of the seven deadly sins, serves to further highlight the fact that Marvell views the Garden as ?adulterate? and a combination of ?forbidden mixtures? which he warns the reader against. This juxtaposition of the Garden and the Countryside shows that Marvell does indeed present an idealised version of the Countryside. He only portrays the good which can be found within the Countryside, and fails to accept the beauty of the Garden but instead insists on its gaudy nature. The Countryside on the other hand is portrayed to be a ?wild and fragrant innocence?. ...read more.

The narrator?s idealised view of the Countryside is biased and fanciful. The Countryside is depicted as ?plain and pure? in contrast to the ?proud? and ?uncertain? Garden. The reference to the supernatural ?fauns and fairies? which excel at maintaining the natural beauty of the ??meadows till?. This view of how nature should be left to its own nurturing hand to tend to it instead of the corruptive hand of man which has created the garden of ?vice?, further shows an idealised view. The use of semantic fields for innocence and purity when describing the Countryside and the contrasting portrayal of the Garden further serves to idealise the Countryside as a perfect place. ...read more.