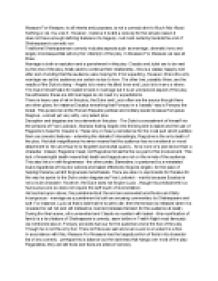 To what extent is Measure For Measure a conventional comedy?

﻿Measure For Measure, to all intents and purposes, is not a comedy akin to Much Ado About Nothing or As You Like It. However, I believe it is still a comedy for the simple reason it does not have enough defining features of a tragedy - but most certainly heralds the end of Shakespeare?s comedic run. Traditional Shakespearean comedy includes aspects such as marriage, dramatic irony and largely inconsequential acts by the ?villain(s)? of the play. In Measure For Measure we see all three. Marriage is both a resolution and a punishment in this play. Claudio and Juliet are to be wed by the end of the play, finally able to continue their relationship - this is a classic happily ever after sort of ending that the audience were hoping for if not expecting. However, this is the only marriage we as the audience are certain is due to love. The other two, possibly three, are the results of the Duke?s doing - Angelo is to marry his jilted lover and Lucio is to marry a whore. The Duke himself asks for Isabel?s hand in marriage but it is an unresolved aspect of the play. ...read more.

This lack of meaningful death means that death and tragedy are not on the minds of the audience. This also links in with forgiveness - the other pirate, Barnadine, is pardoned by a reinstated Duke regardless of his prior actions and Isabel effectively forgives Angelo, for the sake of helping Mariana yet still forgiveness nonetheless. There are also no reprimands for Escalus for the way he spoke to the Duke under disguise as Friar Lodowick - mainly because Escalus is not a main character. However, the Duke does not forgive Lucio - though his predicament is a humourous one so does not require the soft touch of reconciliation. As touched upon above, the punishments at the end are somewhat unorthodox and fairly incongruous - marriage as a punishment is both an amusing commentary by Shakespeare and soft. For instance, Lucio at first is told that he is set to die, then the tension is released when it is revealed he will not and will instead be married (released tension for the audience at least). During the final scene, all is unravelled and Claudio is reunited with Isabel - this reunification of family is a key feature of Shakespeare?s comedy, seen before in Twelth Night most famously. ...read more.

However, it is understandable why Measure For Measure causes such debate. It was definitely not the same exact genre as Comedy Of Errors with its farcical and outrageous tone. Measure For Measure is an extremely dark play. Its main themes are vice, power and judgement - these are not easily identified as comedic features. There is also no safe place like other comedies have - the entire city of Vienna is under the rule of Angelo and none can hide from him. In this play there is no change in where the characters are like in A Midsummer Night's Dream where they flee the city and enter a wood. Interestingly Angelo wrestles with his conscience through a series of soliliquies, which are supposedly more resemblant of a tragedy. Hamlet has one of the most famous Shakespeare soliloquies - but I'd argue that Benedick in Much Ado About Nothing has soliliquies and Much Ado is a far brighter play. In conclusion, Measure For Measure should be described as a tragicomedy, as it is not definitively either comedy or tragedy. But in terms of comedy or tragedy alone, it is more a comedy than a tragedy and meets my expectations of such far more due to the more numerous comedic features listed above. ...read more.