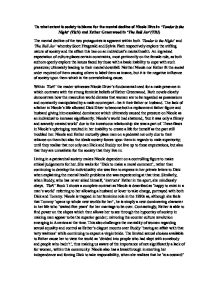 To what extent is society to blame for the mental decline of Nicole Dive in 'Tender is the Night' (TisN) and Esther Greenwood in 'The Bell Jar'(TBJ) The mental decline of the two protagonists is apparent within both 'Tender is the Night' and 'The Bell Jar' whereby Scott Fitzgerald and Sylvia Plath respectively explore the stifling nature of society and the effect this has on an individual's mental health. An ingrained expectation of culture places certain constraints, most pertinently on the female role, as both authors openly explore the issues faced by those with a basic inability to cope with such pressures; ultimately leading to their mental downfall. Neither Nicole nor Esther fit the social order required of them causing others to label them as insane, but it is the negative influence of society upon them which is the overwhelming cause. Within 'TisN' the reader witnesses Nicole Diver's fundamental need for a male presence in which contrasts with the strong feminist beliefs of Esther Greenwood. Both novels clearly demonstrate how the masculine world dictates that women are to be regarded as possessions and constantly manipulated by a male counterpart - be it their father or husband. ...read more.

This independence is strengthened as the book ends from Nicole's viewpoint as d**k 'became a dot' in her life. This allows her to become a dominant character which was a great accomplishment before the feminist movements of the 1960s. Society isn't the only trigger however and the disillusionment of the protagonists is an underlying cause of their mental decline. Nicole uses her relationship with d**k as an escape from her illness but when family life becomes mundane it resurfaces. She consciously uses her marriage to evade problems however she was soon proven wrong as her marriage only instigated more demands on her character due to the expectations of a wife, apparent not only in terms of the society the book was set in, but also that of the writers' reality. Scott Fitzgerald according to Horace Gregory of the New York Herald Tribune, was said to be 'sharing the failure of his protagonists' as the life of Nicole closely mirrored that of his wife Zelda. This allowed him to use his experiences regarding the effect of society's pressures, and reflect them in Nicole Diver's life. Her dreams of love and accomplishment are quickly distorted by the possession of property which causes emptiness in her life of important things - despite many viewing her life as perfect. ...read more.

even though 'he did not want to be owned', showing that despite the facade of having everything, she was neither happy nor would she ever be under such pretences. Equally Esther's inability to earn her desired place at university is an example of Sylvia Plath attacking the philosophy which gives false hopes to many - especially the youth. These values also feature in Esther's move to New York as despite any outsider believing she was 'having the time of her life' the truth of the situation couldn't differ more. She 'was supposed to be the envy of thousands of college girls' however she found the materialistic flaws in society too much to deal with and conventional expectations to be cold after such anticipation. Nicole's anticipation for love and accomplishment mirrors this. In conclusion, society is seen to be the contributing factor towards both Nicole and Esther's mental declines as they both strive to accomplish all that they can. It is once reaching these aims that they realise its irrelevance and it is this disappointment which ultimately becomes too much for each protagonist to deal with. The illusions of society are difficult for these individuals to decipher, and they are both respectively tangled in its complexities. ...read more.